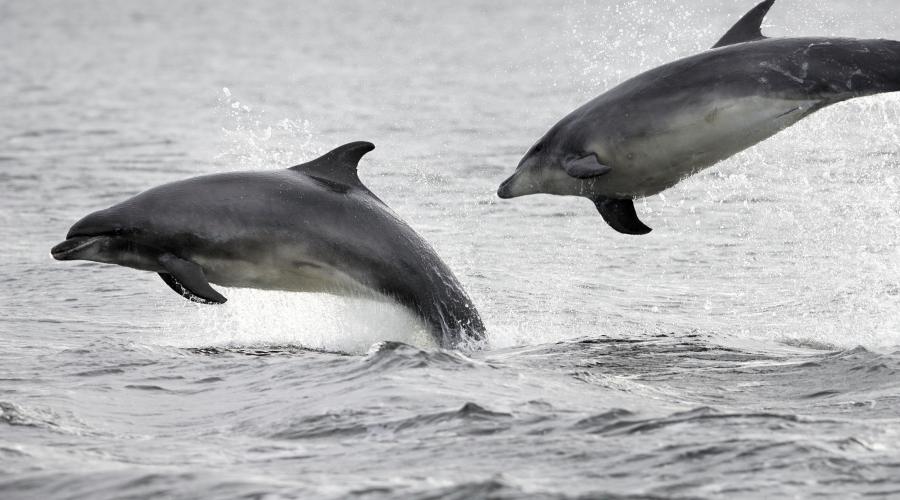 The waters around Scotland are among the finest in Europe for seeing dolphins, whales and porpoises, collectively known as cetaceans.

More than 20 cetacean species can be seen in Scottish waters, but seven species are relatively common close to our coasts:

The harbour porpoise is the

Harbour porpoises tend to be seen alone or in small groups. They may form larger groups where there’s an abundant food source. They feed mainly on small fish species as well as squid, octopus and shellfish.

White-beaked dolphins are found throughout northern European waters. In Scotland, they’re most often seen in the Minch and to the north of the Outer Hebrides, in the outer Moray Firth and off the Aberdeenshire coast.

Common dolphins tend to be summer visitors to Scotland, and are mainly recorded here between May and October, when food is most abundant. They can sometimes be seen in large schools and are highly acrobatic, often leaping clear of the water.

Orcas (killer whales) are the largest species of dolphin. Their distinctive black-and-white coloration makes them easy to recognise. Orcas can be seen in coastal waters off the west coast of Scotland and in the Northern Isles. Some groups of orca feed on fish, while others target seals.

Protection of dolphins and porpoises

Find out about dolphins, whales and porpoises as protected species.

Learn about licensing for dolphins and porpoises.

The Scottish Marine Wildlife Watching Code explains how best to watch marine wildlife with minimal impact on the animals.

Marine Scotland has published guidance on The protection of Marine European Protected Species from injury and disturbance: Guidance for Scottish Inshore Waters

You can report sightings of live cetaceans to the Sea Watch Foundation, Whale Track or to your local biological recording scheme.

To report an injured or stranded live animal, call either:

Search for whales, dolphins and porpoise on the NBN Atlas Scotland