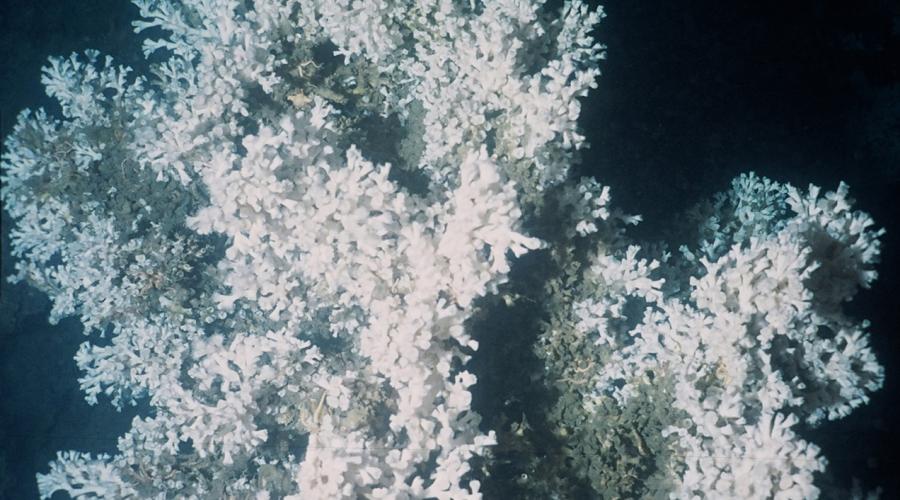 Coral reefs aren’t confined to the tropics – we have a reef-forming coral of our own here in Scottish waters.

Like warm-water corals, cold-water ones have a beautiful hard skeleton, and can form huge reef structures on which many animals depend.

Unlike tropical reef-building corals, cold-water corals can grow in the dark, in deep, cold water, catching their own food. Lophelia pertusa is the only reef-forming coral in British waters.

Around Scotland, reefs form mainly on continental slopes off the west coast, at a depth of 200 to 400m. But L. pertusa has also been found in shallower water above 150m in several places, notably near Barra and Mingulay. The complex of reefs here covers about 100 sq km and is more than 4,000 years old. Some coral colonies appear to be relatively young (less than five years old), which suggests recruitment is still occurring.

Lophelia pertusa larvae initially need hard surfaces to settle upon. Old reef material can perform this function – and once begun, the reef is self-sustaining. Reefs may also form on the hard glacial deposits of old iceberg plough marks.

The coral grows best on sloping seabeds where there’s a strong current. Small coral clumps have been found growing on the legs of oil platforms in the North Sea, and on submerged drumlins north of Shetland.

The abundance of fish life makes the reefs a target for fisheries.  Reefs are slow growing, fragile and easily damaged and thousands of years of growth can be destroyed in a few minutes by heavy fishing gear.

Growth in fishing for deep-sea species like redfish and grenadiers has devastated some coral reefs.

Other potential threats to coral reefs include:

Cold-water coral reefs are a priority marine feature in Scotland’s seas, an OSPAR threatened and declining habitat and a UK BAP habitat.

In 2003, as an emergency measure, the UK banned trawling on the Darwin Mounds, 100 sq km of coral reef north east of Rockall, in response to publicity over the threat to the reefs.  The ban was made permanent in 2004, but covers only a small area of reef.

Cold water coral reefs are a protected feature of the East Mingulay Special Area of Conservation shown on the map below.

More information on the site and how it is managed can be found at NatureScot's Sitelink and on the Marine Scotland web pages.  A detailed report also exists.

Watch the video, A Lophelia reef in Mingulay, Outer Hebrides:

Learn about Scotland's marine Special Areas of Conservation and Special Protection Areas, which are also known as European Marine Sites.