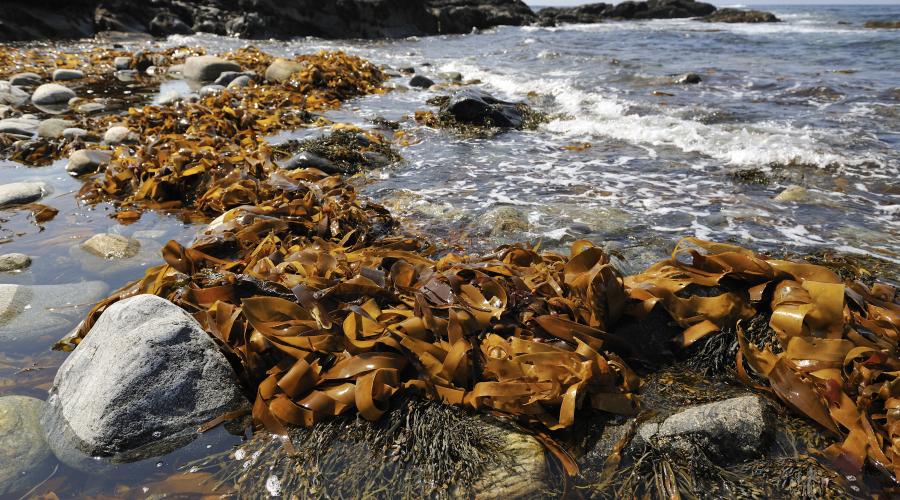 Kelps are seaweeds that form dense underwater forests, which are among the most productive and dynamic ecosystems on Earth.

Kelps are large brown seaweeds that grow on underwater rocks from low tide downwards all around Scotland’s coasts.

Kelp beds are a Priority Marine Feature in Scotland's seas, they provide:

Kelps common in Scottish waters include:

Kelps have no roots. Instead, they attach to rocks with tough, branched holdfasts. In place of true stems, kelps have stiff stipes, which hold them up towards the sunlight. Their palm-like fronds may be long and strap-shaped or split into several strap-like lobes, depending on the species.

Dense forests of cuvie kelp develop wherever there is bedrock or large, stable boulders for attachment. They grow best in strong water movement, from either waves or currents.

The sheltered ‘forest floor’ beneath the kelp can support a variety of red seaweeds and animals including sea anemones, sea firs, sea squirts and sponges.

Fish found near kelp forests include the two-spotted goby, wrasse, pollack and saithe.

Kelp forests are thought to provide some coasts with a degree of protection from storms, by absorbing some of the energy of the waves.

Information on where kelp beds are found is at Scotland's National Marine Plan Interactive (NMPi).

Life among the fronds

Kelp fronds produce slippery mucus, making it hard for animals to attach. Even so, a frond may be covered in sea firs and sea mats by the end of the summer.

In late winter and spring, the kelp sheds its frond, together with all its attached animals, and grows a new one.

To avoid being discarded, the blue-rayed limpets that graze on the frond climb down the stipe and into the holdfast before the old frond is shed.

Old fronds are eaten by a range of marine animals or degraded by bacteria, releasing nutrients back into the water for the next season’s growth.

The rough stipe of cuvie kelp provides attachment for a range of smaller seaweeds and animals such as sea mats, sea squirts and soft corals

Amphipods (small crustaceans) and prawns often live among the seaweeds, and common urchins climb stipes during calm periods to graze the seaweeds.

Homes in the holdfast

Kelp holdfasts are important habitats for a range of animals. Of all the parts of the kelp plant, the holdfast has the highest diversity of species that can feed, shelter and live there.

The sheltered nooks and crannies of a kelp holdfast are typically home to between 30 and 70 different species – and many hundreds of individual animals.

The most common include worms, brittlestars, amphipods, molluscs, anemones and sea squirts.

Small fish such as clingfish and butterfish also hide here. Larger fish, like scorpionfish and lumpsuckers, lay their eggs among holdfasts.

Kelp harvesting needs to be managed to ensure this can be undertaken sustainably.  The scale, intensity and methods of harvesting should not result in long term damage to kelp beds.

Kelp beds are protected in 17 locations around Scotland by a suite of Marine Protected Areas shown in the map below.

Watch the video, virtual dives - kelp forest and harbour seals in the Sound of Barra.

Search for different types of kelp on the NBN Atlas Scotland website.

The algae that thrive on Scotland’s coasts and in our seas are more commonly known as seaweeds. Kelp and sea loch egg wrack form especially valuable habitats.