Water voles are the largest of Britain’s vole species, but this once abundant riverbank mammal is under threat from mink.

Scotland’s water voles are genetically distinct from most of those in England and Wales. The voles that colonised England and Wales following the last ice age were from South East Europe. Scotland’s voles appear to be descended from migrants from northern Iberia, with many having black fur rather than brown.

Water voles usually live beside bodies of water, where they feed on grasses and herbs growing on the banks. They dig their burrows here too. Water voles prefer sites with steep or stepped bank profiles into which they can burrow to create nest chambers above the water table. Soft soils are preferred.

Some habitats may be in intensively farmed and urban areas. The best sites support a continuous swathe of tall grassy vegetation to provide food and cover for the voles.

But desperate losses in the lowlands mean that water voles are now mainly restricted to the smaller tributaries and headwaters of our upland rivers. Here they are found in narrow moorland burns and barren peat hags. The voles prefer areas with a thick layer of peat and lush vegetation.

The water vole is one of our most threatened native mammals. The species has seen a dramatic decline, particularly in the latter half of the 20th century.

Reasons for this decline include:

Water voles have many native predators, but none seem to threaten the survival of the species. However the non-native American mink is a highly adaptable opportunist predator, and female mink are small enough to follow voles into their burrows. A female mink with kits to feed may be a major threat to nearby water vole colonies. Mink are more scarce, or even absent, in upland areas.

Water vole habitat can be damaged if grazing reduces the height of bankside vegetation. But the growth of dense scrub or trees is equally damaging – it leads to a decline in the grasses, reeds, sedges and rushes that the voles eat.

Do you know of a water vole colony? Knowledge of where water vole colonies are helps support conservation efforts, so if you would like to help please report your sightings.

Find out about the water vole as a protected species.

Read about water voles and licensing.

The ecology and conservation of water voles in upland habitats: NatureScot Commissioned Report No. 99

Learn more about the water vole on the Mammal Society website

The GWCT and the science of mink control 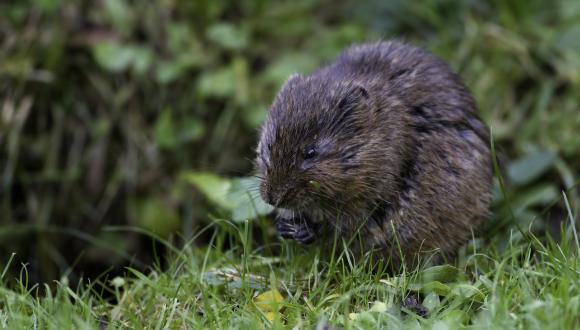 Licensing can permit surveys and research or activities for social, economic or environmental reasons that could affect water voles.