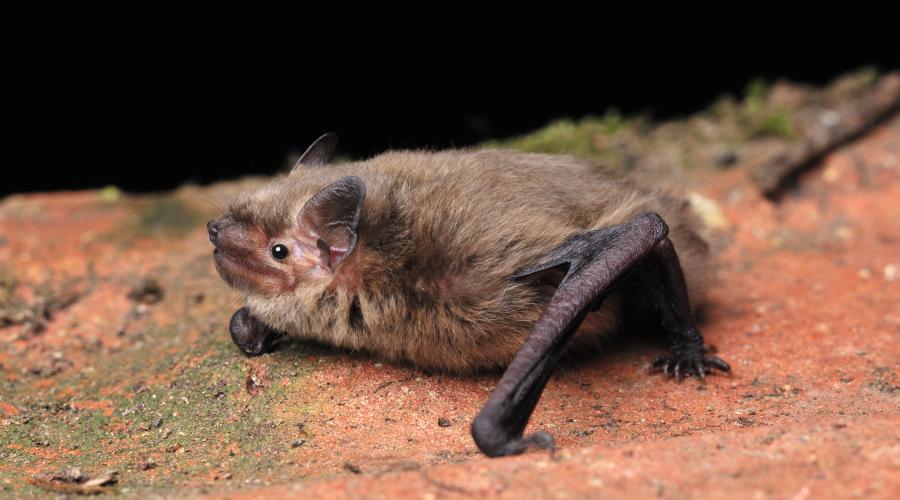 Scotland has 10 bat species, the most widespread and familiar of which are the common and soprano pipistrelle.

Bats are highly specialised animals and the only true flying mammals. Long-lived and intelligent, they have complex social lives.

Bats occur across Scotland, including on many of our islands – though in Shetland only as vagrants. North of the central belt, there are generally fewer bat species the further north and west you travel. Southern Scotland supports the most species. Threave Garden and Estate is home to seven of our 10 bat species, and Culzean Castle and Country Park hosts all but one of them.

Find out about our rarest bats on the NBN Atlas Scotland website:

The common pipistrelle and soprano pipistrelle are much more familiar. They can often be seen flitting about near woodland or open water at dusk, in search of midges and other flying insects. A single pipistrelle may eat up to 3,000 midges in one night.

Bats have a highly advanced echolocation system that allows them to catch tiny insects and avoid obstacles, even in complete darkness. As they fly, bats produce a stream of high-pitched squeaks. By listening to the echoes, they can produce a ‘sound map’ of their surroundings.

All British bats hibernate, as there are very few insects around in winter.

Bat roosts – and other signs of bats

Bats are woodland animals, but many species have come to use roosting sites in buildings as the availability of natural roosting sites in trees has fallen. They have well-established traditions and tend to return to the same sites year after year.

Other signs of bats include their droppings, made up of the indigestible remains of insect prey. Similar in size and shape to mouse droppings, they’re often found stuck to walls or in small piles below a roost exit. Unlike mouse droppings, dry bat droppings will crumble to a powder.

Adult females gather in maternity roosts in late May to early June to give birth and rear their babies. Adult males usually prefer to live alone or in small groups in cooler sites. In late summer, males set up territories around a mating roost, to which they attract females.

Bats across Europe suffered a major decline in the 20th century, particularly since the 1960s, with some species becoming locally extinct. As a result, bats and their roosts now have strong legal protection.

Reasons for their decline include:

The use of approved, less-toxic compounds has significantly reduced this last threat since the 1990s.

Find out about bats as protected species.

Learn about bats and licensing.

How to get to know bats

You can buy or build bat boxes to encourage bats in your garden. A bat detector makes the ultrasonic calls of your local bats audible to humans, helping you to better identify different species.

Local bat groups have a vital role in the conservation of bats in Scotland. Your local group can help you to obtain a suitable detector and interpret bat calls.

You shouldn’t handle bats unless you’re properly trained to do so and you are wearing protective gloves.

Contact our Bats in Houses helpline if you think you have bats in your home and they’re causing a problem.

Discover how to take part in the National Bat Monitoring Programme. NatureScot can grant licences for certain purposes to permit actions that might otherwise constitute an offence in relation to bats or their roosts.

All 10 species of bat found in Scotland are European protected species. View a summary of offences in relation to bats and the places they use.