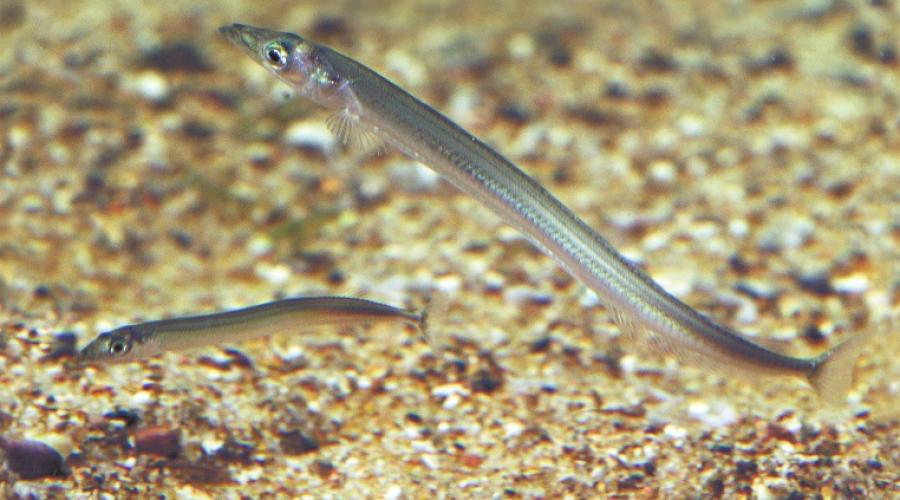 As one of the most important food species for many marine predators including seabirds , the sandeel is often described as a corner stone of the Scottish marine ecosystem.

Sandeels are small eel-like fish which grow up to 30 cm in length and can often be found in vast shoals. They feed primarily on plankton of variable size, ranging from small plankton eggs up to larger energy rich copepods found in great abundance in Scotland’s seas. Some species of sandeel can live for as long as 10 years, reaching maturity at around 2 years of age.

Sandeels have a close association with the sandy substrates into which they bury to protect themselves from predators. Once settled, studies have shown that sandeels are mostly resident, rarely travelling over 20 miles from the areas the call home. In fact, they rarely emerge from the sea bed between September and March, except to spawn.

During spawning sandeels produce a large batch of sticky eggs which attach to the seabed. The larvae tend to hatch a couple of weeks later, after which they float around in the currents for up to 3 months before settling down into the seabed.

As well as being abundant in Scottish waters, sandeels are highly nutritious and are therefore the preferred prey item for many other species of fish, seabirds, seals, whales and dolphins. As they feed on plankton and are eaten by larger marine predators, sandeels represent an important link between the lower and upper levels of the marine food web.

There are five species of sandeel found around in Scottish seas. The two most common species are Ammodytes marinus, known as the Raitt’s sandeel and Ammodytes tobianus, known as the lesser sandeel. The former is typically found in waters deeper than 20 m whilst the later prefers shallow, intertidal waters down to 20 m. The distribution of sandeels within Scotland’s seas is patchy and is generally concentrated on or nearby banks and areas of suitable sediment.

In the past sandeels have been commercially important, targeted by industrial fisheries in the North Sea and to a lesser extent, in the west of Scotland for their oil and use as an animal feed and a fertiliser. Despite being highly managed the majority of sandeel stocks have experienced severe declines, thought to have been brought about by a combination of overfishing and the effects of climate change.

Due to their requirement for specific environmental conditions sandeels are threatened by a variety of different factors. For example, temperature variations can have a large impact on the metabolic rates of sandeels, which affects the success of their reproduction and can increases their mortality rate. The physical disruption or removal of their sediment habitat is also a particular threat for sandeels, which can be brought about by development upon or nearby their sediment habitat and/or activities which disrupt local water currents. Very little is known about the recovery of sandeel in response to the threats mentioned above.

Sandeels are a priority marine feature in Scotland’s seas and have recently been included within one of four additional Nature Conservation Marine Protected Area (MPA) proposals for designation to complete the Scottish MPA network.

Sandeels are also a protected feature of three MPAs: Mousa to Boddam NC MPA, North-west Orkney NC MPA and Turbot Bank NC MPA. Several MPAs also aim to conserve sandeel habitat to ensure the continued supply of young recruits to other sandeel grounds around Scotland and the rest of the UK. By protecting the sources of sandeel in Scottish waters, MPAs may help conserve the current overall population of sandeels, including those in the marine waters of the Forth.

To find out more about sandeels is Scotland’s waters and how Scottish sandeel Fisheries are managed see Marine Scotland’s information page on the species.

Join us on an interactive dive video to see minke whale hunting sandeel on the west coast of Scotland. Our territorial waters are home to around 250 species of fish. Innovative research is helping us to better understand some of the more mysterious species.