Freshwater fish play an important role in Scottish society, with fisheries and angling helping to support our rural communities.

Freshwater fish populate all bodies of water – from small, nutrient poor pools in uplands and moors to large rivers and lochs.

To survive in these diverse habitats, Scotland’s freshwater fish species have evolved a remarkable range of life-history strategies. For example, some fish elect to spend their entire life in freshwater, while others migrate between freshwater habitats and the sea.

Scotland’s native fish fauna – despite the relatively low number of species – is incredibly diverse. Species are also located at the western limits of their European geographical range.

Fish such as the Arctic charr show remarkable levels of diversity, with many distinct types of charr co-existing in a single loch. The Atlantic salmon exhibits a wide range of life-history patterns and supports a world-class fishery in Scotland.

From sea to loch

Most of the fish that originally colonised Scottish freshwaters did so from the sea. As the ice sheet that once covered Scotland retreated northwards at the end of the last ice age, sea fish began to occupy new freshwater environments.

All of the species that we now regard as conservation priorities colonised Scotland in this way.

Sticklebacks (three-spined and nine-spined) also used this marine route to invade Scottish freshwater habitats. Some populations, particularly those containing spine-deficient forms, are also considered to be of conservation value.

The Atlantic sturgeon is rarely seen in Scottish waters, but is still considered part of our native fish fauna.

Other means of introduction

Some other freshwater species may have arrived in Scotland via the land bridge that once connected rivers in southeast England with continental Europe. Such species include pike, perch, roach, minnow and stone loach.

But people have played the most significant role in the spread of new fish populations around Scotland. Most translocations, or introductions, were carried out in a bid to establish new sport fisheries, or to provide a source of food.

Some of these fish – e.g. perch, roach grayling and pike – now support a significant, and growing, fishery resource.

Other species have come from further afield. A valuable fishery for rainbow trout has developed since it was introduced from North America in the 1970s. Other introductions, like brook charr, have become self-sustaining populations.

Other fish translocations from elsewhere in the UK have caused great damage to Scotland’s freshwater fish fauna or their habitats. For example, ruffe introduced to Loch Lomond feed on the eggs of powan. With the ruffe now firmly established, the powan population is under threat.

Regulations now exist to protect our native biodiversity from the consequences of stocking non-native fish into Scottish fresh waters. It applies to stocking of any species, to any inland Scottish water system (apart from within fish farms or to ornamental fish-keeping facilities such as garden ponds). 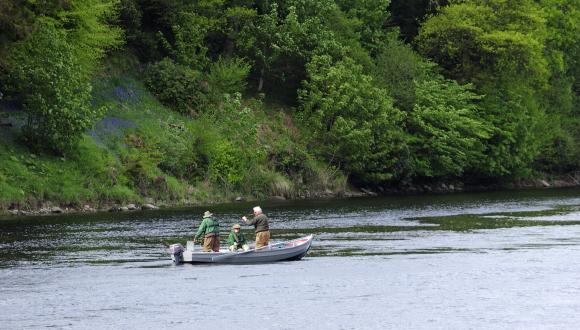 Scotland supports a number of world-renowned freshwater fisheries. Find out how they're managed with sustainability in mind.