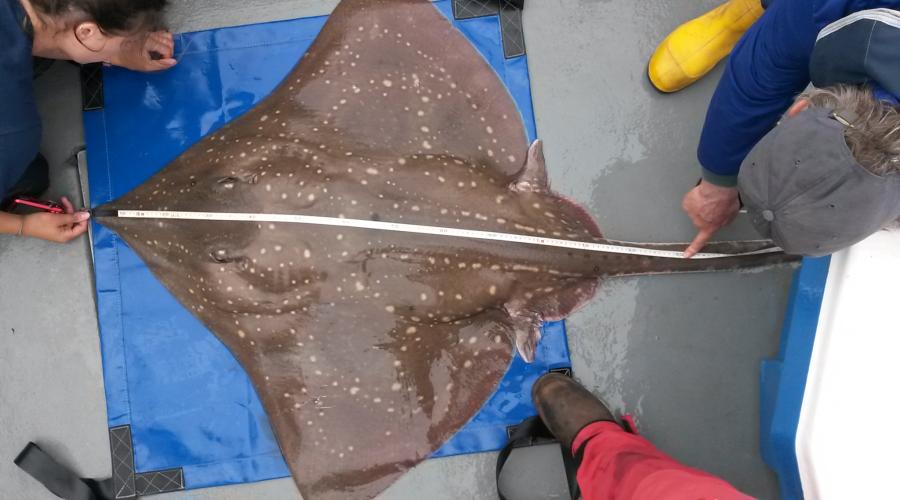 Anglers’ photos can tell us lots about the skate population of Loch Sunart to the Sound of Jura Nature Conservation Marine Protected Area.

Skates have very varied spot patterns but we have found it is possible to identify individuals from the spots on their dorsal or upper surface.

Scottish Association for Marine Science (SAMS) scientist Steven Benjamins tested this theory, using around 400 photos taken by Skipper Ronnie Campbell in the Loch Sunart to the Sound of Jura NCMPA from 2011-2016.

Dr Benjamins was able to identify 232 individual skates from their spot patterns and recognise them in recapture photos. Of the 232 fish, 76 (32%) were recaptured at least once between 2011 and 2016.  On average, about 10 months elapsed between the capture and recapture of a fish. The longest time between capture and recapture was 4 years 5 months.

You can read a research paper on the project - Evaluating the potential of photo-identification as a monitoring tool for flapper skate (Dipturus intermedius).

Since skate’s spot patterns don’t vary significantly over time we can recognise individuals in photos over the long term.

This will help to reveal:

We hope that using photos to identify skates will end the need to tag fish and allow more anglers to help monitor the skate population of the Loch Sunart to the Sound of Jura NCMPA and further afield.

Passive integrated or PIT tagging will continue in the Loch Sunart to the Sound of Jura MPA  to serve as a check on the photo identification process and speed up skate identification since we have not found software to help us accurately match the photos yet.

Anglers and skippers are invited to add skate photos and Scottish Shark Tagging Programme (SSTP) tag numbers to our database by visiting Skatespotter. You can also query Skatespotter for the history of any skate you catch by searching on SSTP tag number or date once your photos have been processed.

Our poster sets out how to take a good photo for identification purposes and what details to include with it.

Our territorial waters are home to around 250 species of fish. Innovative research is helping us to better understand some of the more mysterious species.