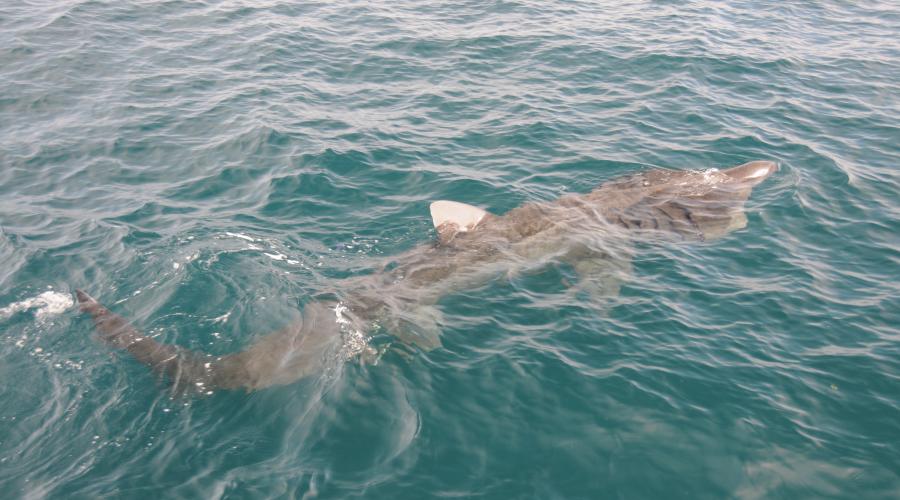 The world’s second largest fish – a gentle, toothless giant, which feeds solely on plankton – is found in large numbers in Scottish waters each summer.

We are lucky to have the second largest fish in the world return to Scottish waters each summer – an exciting sight! The basking shark grows up to 10m (33ft) long, and the Sea of the Hebrides on the west coast of Scotland provides conditions that attract large numbers of sharks each summer, when we can see them 'basking' at the surface, feeding with their huge mouths wide open. These gentle giants have no teeth, and their massive bodies are nourished entirely by plankton soup, filtering millions of litres of water an hour through its gills! Basking sharks were once fished commercially in Scottish waters for shark liver oil, which was used in various industries.

In December 2020 the Sea of the Hebrides Nature Conservation Marine Protected Area (MPA) was designated for basking sharks, along with minke whale and other features. This recognises the importance of the area for these species. The basking shark is also a priority marine feature in Scotland’s seas.

The Scottish Marine Wildlife Watching Code alongside the Wildlife Safe (WiSe Scheme) provide the best guidance for wildlife watching operators, and will help us all enjoy and support the conservation of this magnificent fish.

Since 2012, NatureScot has been working with the University of Exeter to understand more about basking shark habitat use and behaviour using a variety of tagging technologies.

The most recent research investigates basking shark behaviour below the surface of the water using innovative towed camera tags. The technology has already provided unique footage of underwater group behaviour of basking sharks. Whilst we know basking sharks spend a lot of their time feeding in Scottish waters during the summer months, we still do not know if basking sharks also breed here. View the animated video clip below to get a shark’s eye’s view of their environment. Also read the scientific paper describing and analysing the sharks underwater behaviour.

A total of 61 satellite tags have been deployed on basking sharks, as part of the NatureScot and University of Exeter partnership project to investigate their movements and results were published in our 2016 NatureScot Research Report, as well as pier reviewed scientific papers (see Related Links below). Key findings:

Basking shark data have been recently collated and analysed: Zones were identified where basking sharks occur more frequently and where they may be more vulnerable to certain human activities.