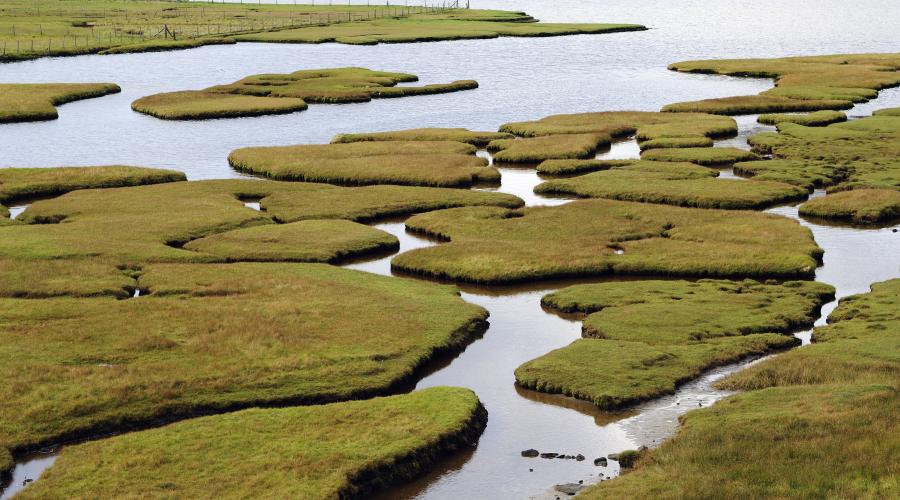 Saltmarsh forms in sheltered environments at the head of bays and inlets, where the tide covers plants twice daily.

Saltmarsh is a type of vegetation dominated by higher plants that is regularly inundated by salt water.

Seen from above, saltmarshes are wonderful mosaics of land and water, with sinuous creeks and isolated pans (pools) among the green swards. An underground drainage network may connect the pans – you may even spot one of the ‘pipes’ in a dry pan.

Most saltmarsh vegetation is intertidal. But in some exposed situations – even on cliff tops high above the tidal limit – there may be so much sea spray that the vegetation is identical to that of a saltmarsh.

Saltmarshes tend to develop in quiet conditions where the sea deposits fine sediments. Some may have been created when coarser terrestrial sediments were drowned. We also know that some saltmarshes in the Western Isles were once machair.

Saltmarsh occurs on most Scottish coasts – with by far the largest areas in the Solway Firth. Scotland has 7,076 hectares of saltmarsh, 77.4% of which lie within Sites of Special Scientific Interest.

The vegetation differs greatly (in general terms) between Scottish and English saltmarshes. Many of the familiar English species are found only in the south-west of Scotland or are absent altogether.

In Scotland, the lower ‘pioneer’ saltmarsh that grades into mudflats is scarcer, and many Scottish systems have an abrupt seaward margin that gives way directly to mudflats.

Scottish saltmarshes contain a range of northern species such as:

Cord grass (Spartina anglica), which is a big problem in English and Welsh saltmarshes, occurs on only some Scottish sites. Its growth in Scotland is rarely extensive, except on a few sites in the Solway. The grass covers a total area of just over 100 hectares (less than 2% of the total habitat area).

Atlantic saltmarsh is displacing pioneer saltmarsh in the Solway Firth, which suggests that sediment deposition is outpacing relative sea level rise. This finding of our work on the Solway (with the Environment Agency) has also been reported in some loch-head saltmarshes on the west coast.

We continue to research these changes, as do others.

Saltmarshes aren’t very dynamic as they occur in sheltered situations. For example, a single vehicle may compact the soil such that its tracks last for decades.

Large areas of saltmarsh were claimed for agriculture in the past, notably in the Firth of Forth. Embankments now surround these areas.