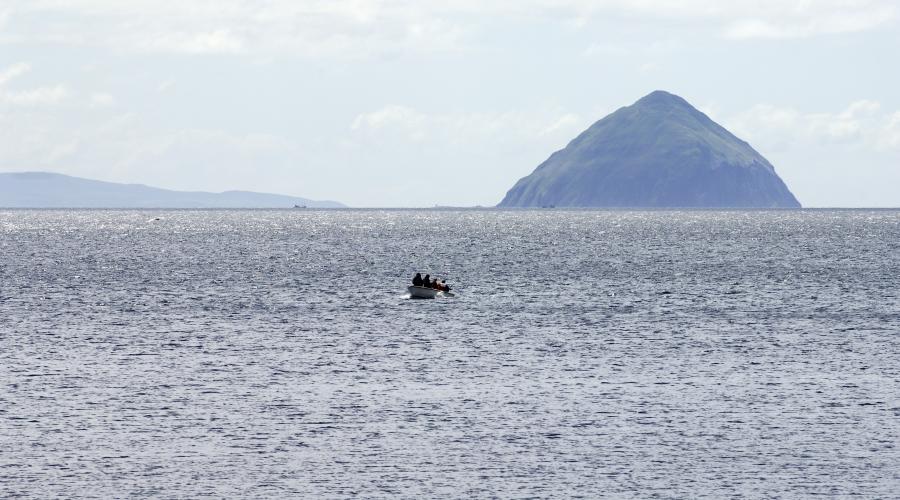 Subtropical Scotland was warm and dry for much of the Permian and Cretaceous, from 299 million to 65 million years ago.

Scotland had drifted to the subtropical zone north of the equator by the Permian period, between 299 million and 250 million years ago. The climate was warm and dry, and desert conditions prevailed. Sediment blown around by the wind was re-deposited in the form of sand dunes. Active faulting in southern Scotland was also common as the Earth’s crust continued to extend.

The desert conditions lasted into the Triassic period. By the Jurassic, about 200 million years ago – when Scotland lay at a similar latitude to the Mediterranean Sea today – a shallow tropical sea covered most of Scotland. The abundant sea life included corals and ammonites, while dinosaurs roamed the surrounding land.

Scotland was dry land for most of the Cretaceous period (145 million to 65 million years ago). By the Late Cretaceous, about 75 million years ago, a tropical sea submerged Scotland once more – except its very highest areas. Thick layers of chalk were deposited on the sea floor. Little evidence is seen of the chalk today, as much of it has since been eroded away.

By the end of the Cretaceous, much of the huge Caledonian mountain range – formed during the Caledonian Orogeny – had been reduced to a landscape of low relief near to sea level.

The largest areas of Permian and Triassic rocks occur:

Scotland’s small areas of Jurassic and Cretaceous rocks are confined to the east and west coasts. The largest areas are around Helmsdale on the east coast and on Skye – Scotland’s ‘Dinosaur Island’ – in the west. Find out about fossil collecting on Skye.

A Landscape Fashioned by Geology