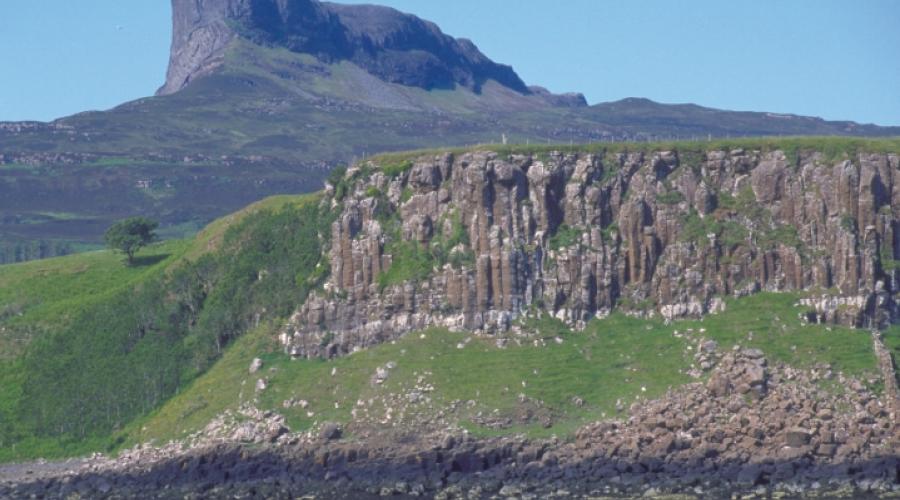 Scotland drifted northwards to its present latitude during the Palaeogene and Neogene, between 65 million and 2.6 million years ago.

At the start of the Palaeogene, the crust along Scotland’s western margin domed and stretched, and there was a short but intense period of volcanic activity. These events were part of the opening of the North Atlantic Ocean, which gave rise to vast lava fields and a chain of volcanoes.

These cover what we now know as:

Much of the Highlands was rapidly ‘uplifted’ by the doming, with some areas rising as much as 1km. This uplift, which likely carried on at a more modest rate throughout the Neogene, continued to elevate the Highlands.

The early Palaeogene was also a time of strong global warming, and Scotland had a hot and humid climate similar to that of West Africa’s subtropics today. This provided ideal conditions for deep chemical weathering of the bedrock.

During the Neogene (23 million to 2.6 million years ago), rivers running from high ground in the west carried sediment eastwards into the North Sea basin. The climate gradually cooled, until the cooling intensified about 3 million years ago.

This culminated 2.6 million years ago in the start of our most recent Ice Age – and the beginning of the current Quaternary geological period.

A Landscape Fashioned by Geology

Rocks formed since the foundations joined

Scotland once lay below the equator. Find out about its changing climate as it moved north and the rocks that formed as a result.