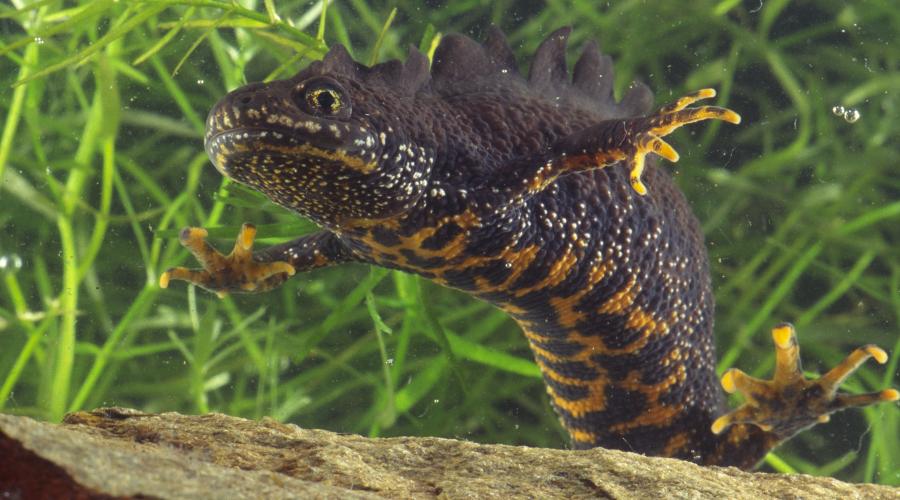 This species has suffered due to the loss of small ponds from our landscape caused by changes in land management practices.

The great crested newt (Triturus cristatus) is the largest of Britain’s three newt species, with adults reaching up to 17cm in length.

This amphibian gets its name from the jagged crest along the adult male’s back, which gets larger in the breeding season. Both sexes are very dark in colour, with a vivid orange belly with irregular black spots.

The great crested newt spends most of its life on land, though it must return to small freshwater ponds to breed. The nocturnal newt hunts its invertebrate prey by night and rests in damp grassland or leaf litter during the day. It usually lives within 250m of a breeding pond.

Rare across Europe but still quite widespread in Britain, the great crested newt is found in Scotland in patches in the rural south and around Inverness. The species also occurs across the central belt, where it’s often under threat from industrial or housing development. This is because the newt has found a niche in former mineral workings and other brownfield habitats.

Breeding takes place in ponds in spring to early summer, when it’s warm enough. A female lays around 300 eggs one by one on vegetation. Larvae usually develop in the pond for three months before moving to land. Once on land, the young take around three years to reach breeding maturity.

The species has suffered a decline in recent years and is under threat in several European countries. The British great crested newt population is amongst the largest in Europe.

A 1995-96 national survey found 85 ponds in Scotland with great crested newt populations. Subsequent work brought this number up to around 160 ponds.

Threats to the great crested newt include:

Great crested newts thrive where several ponds within an area are connected by suitable habitat. If one pond becomes unsuitable, others are still available for breeding.

The great crested newt is a European protected species.

Find out about protected species of amphibian and reptile.

Learn about licensing for great crested newts and natterjack toads.

You can report any sighting of an amphibian or reptile to the Record Pool.

Alternatively, find out about taking part in the National Amphibian and Reptile Recording Scheme.

Amphibian and Reptile Groups of the UK 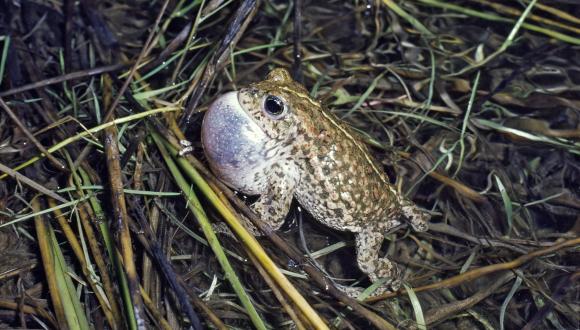 Restricted to a few places in Dumfriesshire, the natterjack toad a European protected species is Scotland's rarest amphibian. 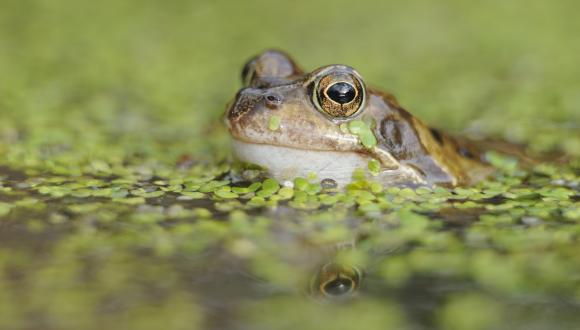 Scotland's cool climate is a challenge for cold-blooded herptiles. Find out how our six amphibian species and three common species of reptile cope.