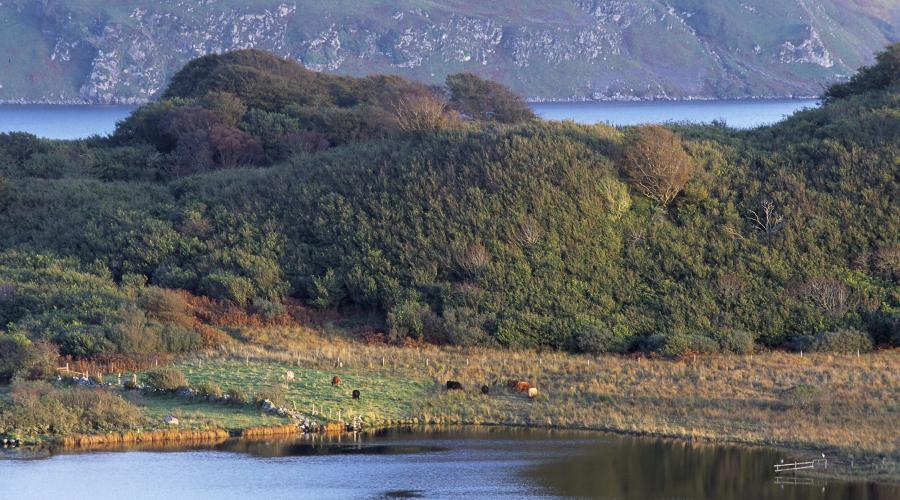 Atlantic hazelwood is at its best in Scotland and supports many lichens and other species that are rare elsewhere in Europe.

Atlantic hazel occurs in the oceanic climatic areas of the western British Isles. It is found widely along Britain and Ireland’s west coasts. But the hazel only develops into Atlantic hazelwood, a habitat of high biodiversity, in very few places.

Hazel grows naturally as a multi-stemmed shrub, without coppicing or any other human intervention. Hazel ‘trees’ do exist, but these almost always result from constant grazing that prevents the growth of multiple stems.

This pioneer species will invade open ground and form dense stands that can persist indefinitely, despite some grazing. Hazel will die out in the increasing shade of tall trees. But it is almost impossible for other trees to establish in the dark beneath the closed canopy of a hazelwood in full leaf.

Our ancient and species-rich Atlantic hazelwoods are among Scotland’s oldest woodlands. They are older by far than our Atlantic oakwoods and even some of our Caledonian pinewoods. Hazel was one of the first woody species to establish in the west as the ice retreated about 11,000 years ago.

Scotland’s Atlantic hazelwoods are home to some of Europe’s richest collections of oceanic mosses and liverworts (bryophytes) and lichens. An abundance of flowers, ferns and fungi also live here.

Hazel goes through a continual cycle of renewal and decay, which contributes to this diversity. A typical hazel stool has a cluster of thin, medium-sized and thick stems, each of which attracts different species.

Small lichens form thin, colourful ‘crusts’ on the smooth bark of young hazel stems. These crustose lichens of the Graphidion community are one of the real specialities of the Atlantic hazelwoods. Some are UK Biodiversity Action Plan priority fungi species and a few occur nowhere else in the world.

All such lichens require ‘old-growth’ woodland, or long periods of ecological continuity. These lichens aren’t found in hazel that’s been coppiced or in hazel stands that have recently expanded.

Atlantic hazelwoods are also home to some fascinating and beautiful fungi, such as spring hazel cup and the particularly curious hazel gloves. This very rare fungus seems to occur only in ancient Atlantic hazelwoods.

Flowers found in Atlantic hazelwoods include:

This habitat gets very little attention or even recognition. But our Atlantic hazelwoods deserve to be seen as a unique and important habitat in a European and world context.

We’re keen to discover potentially species-rich stands of Atlantic hazel, so that we can promote their sympathetic management.

You don’t need to be a woodland specialist to assess the importance of your local hazelwood for biodiversity. Just follow our four simple steps when you next visit the hazel stand.

Read about Atlantic Hazel: Assessing the quality of your local hazelwood for biodiversity

If you own the woodland and want to improve its management with Scottish Rural Development Programme support, you should get Atlantic Hazel Action Group advice. You may also wish to find out about the Woodland Grazing Toolbox initiative on the Scottish Forestry website.

Lichens and bryophytes of Atlantic woodland in Scotland: an introduction to their ecology and management