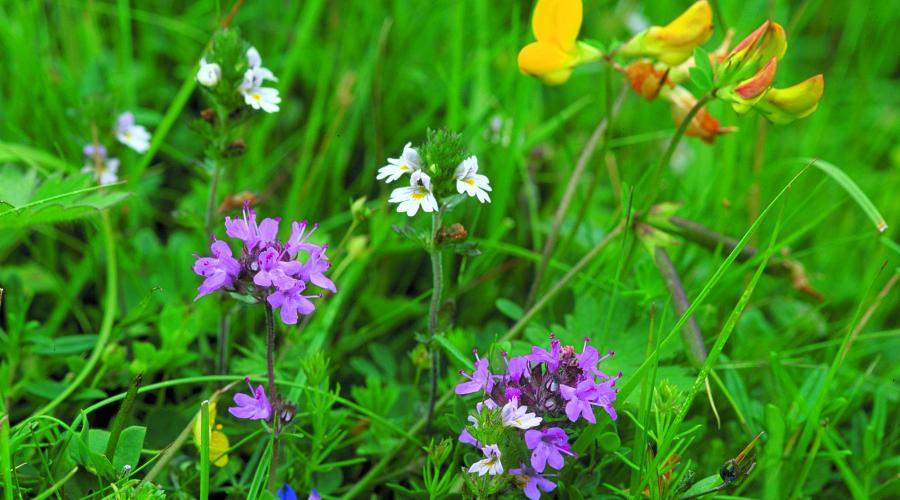 Unimproved lowland grassland is rare in Scotland today. Many areas have either been improved to increase agricultural yield or neglected.

Grassland covers a third of Scotland and feeds our cattle and sheep as well as much of our wildlife.

Most farmland grasslands are fertilised – or ‘improved’ – to make them more productive. But this reduces biodiversity as just a few grass species will grow rapidly and crowd out smaller, slower-growing species.

So while farmers have increased their yields of meat and milk by improving grassland, diverse ecosystems rich in wildlife have been replaced by simple ones, which rely on chemical inputs.

Grazing or cutting of some less productive grasslands has been reduced or abandoned altogether in recent years. This can also lead to loss of diversity, as rank grasses increase and scrub and bracken may encroach.

These are the meadow areas that haven’t been heavily fertilised and are still full of flowers, rushes, sedges, mosses and a wide variety of wildlife. They are often notable for the summer colours of plants such as purple thyme and knapweeds, yellow rattle and primroses, and white eyebrights and oxeye daisies.

Grassland vegetation requires some grazing or cutting – enough to prevent the meadow getting overgrown and rank, but not so much that flowers are unable to seed.

Many grassland plants need small, open spaces to germinate, while many invertebrates shelter in tussocks. The best grasslands for wildlife contain both short and long patches – a variety of microhabitats for a variety of species.

Bumblebees, butterflies and many other insects feed on the nectar and pollen of the range of plants present in these species-rich grasslands. In turn, birds such as the yellowhammer and skylark feed on the wealth of insects.

How to identify species-rich grassland

The presence of some of the species below may indicate that grassland is species rich:

Grassland for plants and animals