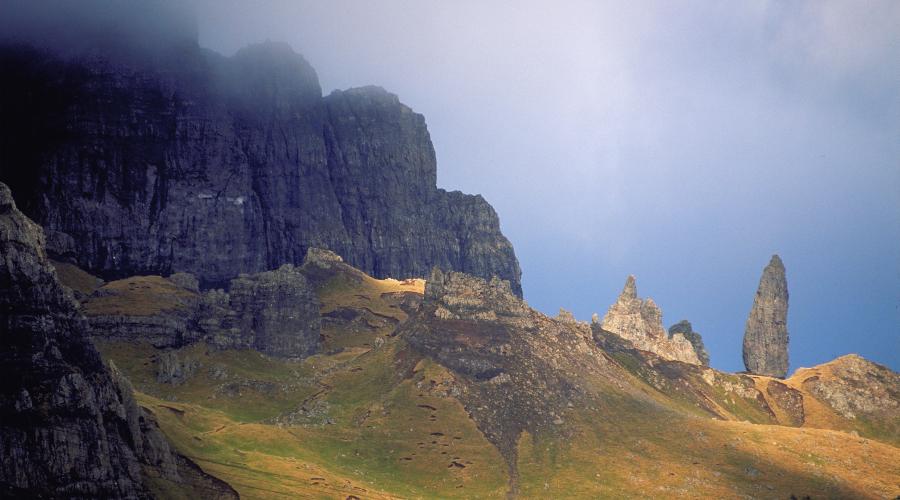 Landslides are a group of landforms created by the downslope movement of rock or soil due to gravity.

Landslides can be grouped by:

Individual landslides are often formed by more than one type of movement, so classifying distinct groups of landslides has proved challenging.

Different types of features are grouped below according to where they occur and whether they mainly involve bedrock or regolith (rock and soil debris).

All landslides are potential hazards, but most occur in remote mountain areas away from people. Debris flows in particular are a regular hazard that disrupts transport routes in the Highlands during severe weather conditions.

Single and small rock falls from cliffs build up to form aprons of scree or talus, sometimes developing over long time periods. Some scree slopes are relict, where the scree apron almost buries the crags that once released rock falls that formed them.

A trait of actively forming rock fall screes is the sorting of rock debris, with the largest stones at the base of the scree and the smallest at the top. Reworking of the scree slopes by other processes – e.g. snow avalanching, debris flows and gully erosion by water – disrupts this sorting.

This group of landslides varies greatly in features. Many rock slope failures in Scotland are so large (involving whole mountainsides) that most people don’t even notice them.

For example, the rock slope failure on Beinn Fhada in Kintail is huge – 3km long, from near sea level to 1,000m, with a failed mass of perhaps more than 100 million cubic metres.

Rotational landslides occur where more resistant rocks founder over underlying weaker rocks. Multiple failures may produce spectacular whole mountainside collapse, as at Trotternish in Skye and at Hallaig in Raasay. At Hallaig, the landslide complex continues under water, down to the seabed.

Debris flows are Scotland’s most common type of landslide hazard. They range in character from sloppy wet mudflows to slurries of rock debris similar in texture to wet concrete.

Debris flows begin on steep slopes of more than 20 degrees. But they can continue to travel over much gentler ground that slopes at only 10 degrees. How far a debris flow can travel depends on how much debris it carries compared to the volume of water.

A debris flow often starts off as a translational slide, but the water and rubble mix as the slide moves downslope, forming a slurry that flows. Debris flows often leave a trail of rubble in their wake, forming distinctive ridges or levees.

Debris flows range in size from 1m to 10m across, and may carry up to several cubic metres of debris. One-off debris flows may occur on open hillsides, but repeated debris flows are more common below gullies.

Debris cones form where repeated debris flows build up. Many debris cones in the Highlands have periods of activity and quiet. To trigger them, suitable weather conditions are needed and enough mud and rock must have collected higher up in the gully floor.

Creep is the slow downslope movement of material under gravity. It generally occurs over large areas.

Solifluction is a mixture of creep and flow, which forms distinctive sheets, terraces and lobes of debris and boulders. Solifluction sheets and lobes are found on steeper slopes where the process has moved loosened boulders and soil downslope.

Scotland’s larger boulder lobes were last active during the Loch Lomond Readvance (12,900 to 11,500 years ago). Some smaller solifluction features are still active most winters.

Such slumps and slides occur in very wet weather, when the near-surface soil and rock debris gets saturated with water, and slides and flows downslope. They can develop into more dangerous debris flows on steep ground, where the landslide may travel a long distance, churning up the debris into a slurry. 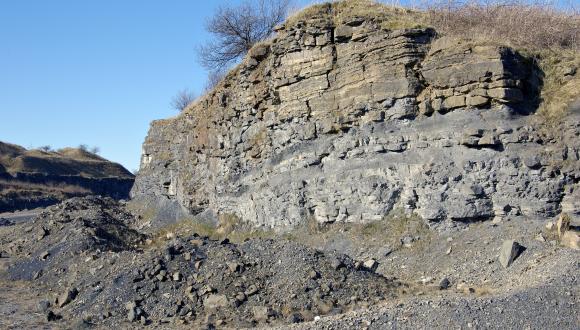 Managing Scotlands rocks and landforms to safeguard them for the future is an important part of conserving our natural heritage. 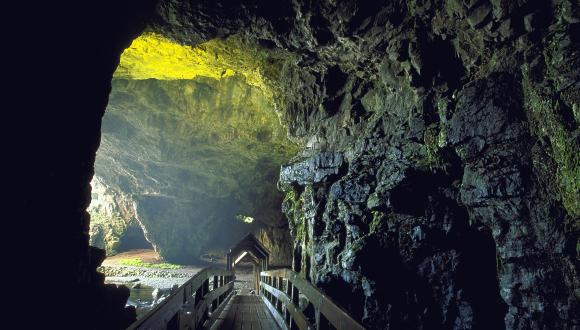 Wave action can cut caves from any type of rock. Or acidic stream waters can dissolve carbonate rocks such as limestone to form either caves or karst.