Note: This page is a copy of the printed version of our leaflet available on site.

With its breathtaking displays of wild flowers and unbelievable variety of insects and birds, St Cyrus is one of the richest and most diverse nature reserves in Britain.

Set at the mouth of the River North Esk, the Reserve sweeps around the sandy shore of the Aberdeenshire coast, just north of Montrose. From its towering volcanic cliffs, to swathes of beautiful beach, set off by an ever-changing landscape of sand dunes and flower-rich grasslands, this is a stunning landscape.

What makes St Cyrus so special?

Plants and insects are superbly protected at St Cyrus, with the cliffs and sand dunes providing vital shelter from the wind. More than 300 different plant species have been found here, with many, such as the delicate pinkishwhite flowers of night-scented Nottingham catchfly, uncommon in Scotland and at the edge of their northern range. Others such as meadow saxifrage and hairy violet are more common on chalk and limestone soils in southern and eastern England but grow here thanks to the fertile soils produced by the volcanic rocks. The abundance of plants encourages invertebrates too. If you’re lucky you can see all four of Scotland’s grasshopper species on the Reserve. This huge diversity of invertebrate life attracts large numbers of insect eating birds too, such as stonechats, yellowhammers and whitethroats. Common lizard can also be seen frequently, basking in the sand dunes.

The cliffs at St Cyrus are all that remains of vast sea cliffs formed 375 million years ago. During the last ice age the sea battered these cliffs and then, when the ice melted around 8,000 years ago, they were left high and dry. Today they form the backdrop to the Reserve and are a place where only specialist plants that can cope with thin soils and unreliable water supplies, can survive. Sea pink, or thrift, forms low cushions in crevices, together with white cascading sea campion, while white stonecrop is easily recognised by its fleshy leaves, which store water like desert cacti. Fulmars nest on sheltered nooks towards the top of the cliffs, along with peregrine falcons.

Among the first plants to grab a place at the top of the beach are the lilac flowering sea rocket and white flowered scurvy grass. These strandline-hugging plants have amazing staying power when you consider that high tides, drying winds and stinging sands continually buffet them. The fleshy, oval leaves of scurvy grass are rich in vitamin C, which is why sailors used to eat them to make up for the lack of fruit and vegetables on board ships. You may also be lucky enough to see common and grey seals, which occasionally bask on the sand banks at the mouth of the river, while dolphin, porpoise, minke, humpback and killer whales have all been sighted offshore.

The grasslands benefit from the shelter of the cliffs and the dunes, making them warmer and allowing wildflowers to thrive. Visit in summer and you’ll find a riot of colour, from the deep violet of clustered bellflower to the cerise and deep crimson of the delicate maiden pink. Over 400 species of butterflies and moths have been recorded feeding on this floral feast, including some rare ones that rarely venture this far north. Watch out for red and black six-spot burnet moths flitting over purple knapweed heads and common blue butterflies dancing across the meadow.

Only a few plants, like spiky marram grass and grey-green sea-Iyme grass are able to cope with the extreme conditions of the sand dunes, their roots helping to bind the sand together. Other plants gain a roothold once the sand has stabilised, such as purple spring vetch, which you’ll see near tracks and among the rabbit warrens, along with the pastel blues of early forget-me-nots and wall speedwells, which provide a burst of colour in the spring.

To avoid trampling plants please stay on the paths. Keep dogs on a short lead or under close control during bird nesting season (April-July) and always clean up after your dog. Please follow requests on any notices you see. The Visitor Centre in the old lifeboat station and toilets are open April-October daily and November-March Monday-Friday.

A short walk up to a viewpoint in dunes overlooking the beach. Find out about the vanishing river, ancient volcanoes, falling seas and plants on the reserve. Several seats to stop and admire the views.

The trail hosts a range of specialist plants, birds and animals adapted to survive in the salty sea air. There’s a fascinating human history too, from the ancient kirkyard to the recent salmon fishing industry. There is a leaflet to accompany this trail.

A gentle, winding path to the estuary bird hide with the chance to see buzzards, swans and waders. In summer look out for butterflies too.

A meadow trail available between May and October. Each fish box describes some of the fantastic flowers on the reserve. Look out for the first fish box from the Beach trail! St Cyrus NNR is a glorious place for an invigorating coastal walk at any time of year. 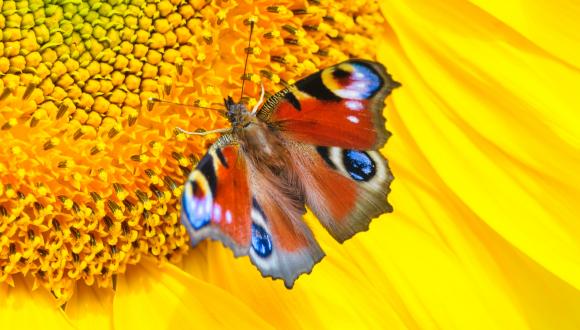 St Cyrus NNR - About the reserve

Learn more about how we manage the reserve for people and wildlife.