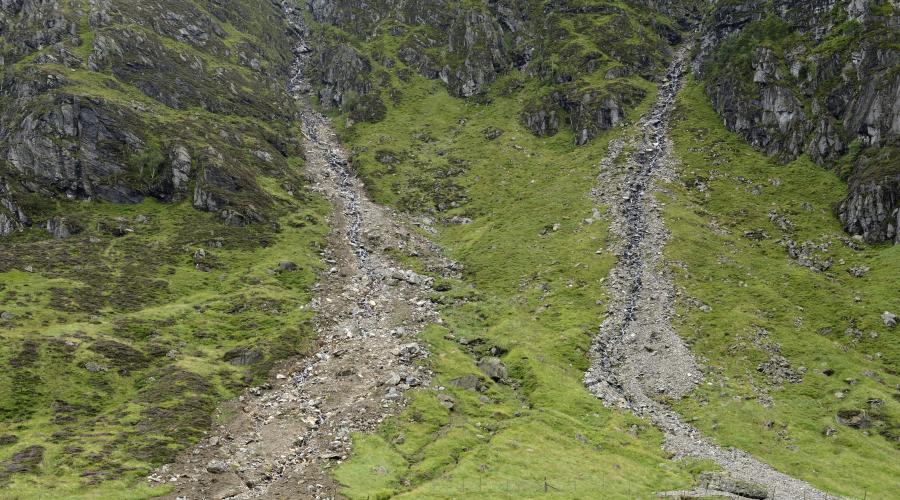 Climate affects the landform processes that shape Scotland’s mountains, rivers and coasts, and maintain our habitats, ecosystems and landscapes.

Geomorphological processes include flooding, erosion and deposition. These processes carve and mould our mountains, rivers and coasts; and they maintain habitat quality, diversity and ecological functions. Changes in climate will have significant implications for the conservation management of these dynamic environments.

Net regional sea-level is projected to rise by 7mm per year in Scotland in the next few decades. This exceeds rates seen in the last few thousand years and the effects are likely to be made worse by a scarcity of coastal sediment and more stormy weather.

Other impacts may include:

The geological record tells us about past environments and how they responded to broadly comparable climate change. This information can inform climate change impact scenarios for biodiversity and geodiversity.

Climate change impacts on rock exposures and landforms may include:

Climate change will alter the character of our landscape, as geomorphological processes, soil properties and land-use practices change.

Temperature and water have a large influence on soil formation; therefore climate change will cause changes in our soils.

A warming climate is likely to impact organic carbon levels in soil, and thus on greenhouse gas emissions. Scotland’s soils are a rich repository of carbon – they hold more than 65 times the total amount of carbon held in all of Scotland’s vegetation (trees included). But climate change puts pressures on soils and the vital roles and functions they perform for us.

Climate change will also influence the way we manage our land and soils. For example, changes in the intensity and timing of rainfall events may create more waterlogged soils when cultivation and harvesting would usually occur.

How will Scotland’s landscapes be affected by climate change?

Soils in the context of climate change (The Scottish Soil Framework)

For a small country, Scotland has a remarkable diversity of rocks, fossils, landforms and soils. This geodiversity results from our