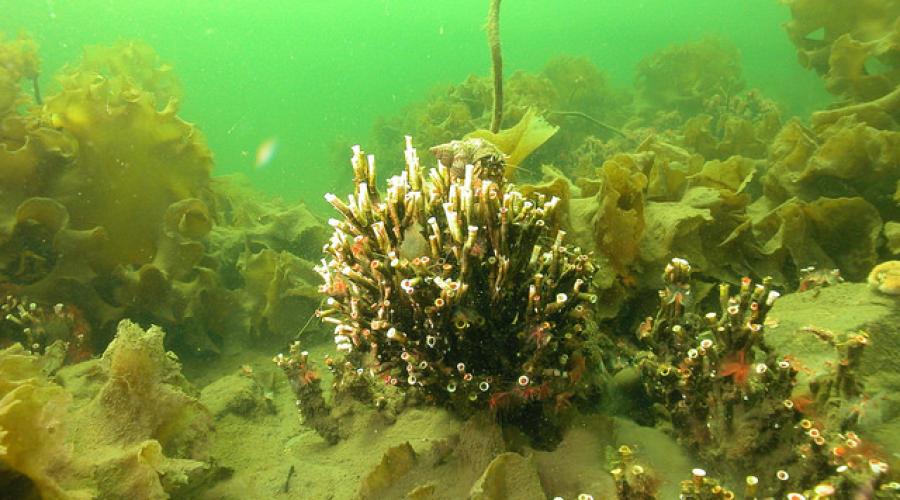 The northern feather star is a graceful and curious echinoderm with 10 colourful, 15cm-long arms.

Flame shells or file shells live on the seabed inside nests built from shells, stones and other materials. Divers spot them only rarely.

The European spiny lobster – also known as crayfish or crawfish – often lives in groups in rock crevices, its long antennae poking out. It uses its small front limbs to scavenge food from the seabed. Large eyes allow the lobster to be more active at night.

Cold-water coral reefs are rich feeding grounds for various species. We also think they serve as breeding grounds and refuges for many commercial fish. Video surveys have shown the reefs as home to fish such as ling, pollack, redfish and tusk.

Maerl beds are an important habitat for a wide range of smaller marine plants and animals. They’re great places for juvenile animals to hide from predators. Many bivalves, urchins, sea cucumbers, anemones and worms burrow in the maerl gravel beneath the living bed. In places where wave movement stirs the seabed, maerl beds develop into a ‘ridge and furrow’ formation.

Many fish and small invertebrates live among seagrass beds, sheltering between the swaying leaves of the plants. Common eelgrass is one type of seagrass. The beautiful kaleidoscope jellyfish (Haliclystus auricula) is strongly associated with seagrass beds.

Loch Creran’s serpulid reefs grow at depths of 6 to 10m, and reach sizes of up to 75cm high and 1m across. Also known as tubeworms, the reefs create a high-rise home for a host of animals.

The spiny dogfish or spurdog (Squalus acanthias) is a critically endangered species found mainly in coastal and shelf waters in depths of 10 to 200m. Generally migratory, spiny dogfish but can exhibit degrees of residency causing local abundance in some areas off Scotland’s west coast.

Scotland has a few great locations for spotting basking sharks. These gentle giants have no teeth and grow to around 10m on a diet of plankton. Basking sharks prefer open waters, but move closer to shores in summer. Look for the fish feeding at the surface, with their huge mouths wide open. You may be able to get help to minimise the agricultural damage and economic losses caused by geese that use your land on the Solway estuary north shore. 'SNH will undertake a questionnaire survey of scheme participants to help provide feedback on their level of satisfaction and the levels of damage caused by geese. The aim of the Outdoor Learning in Nature Fund is to support more young people to have regular, frequent, structured and progressive outdoor learning experiences.

Glen and Ben Nevis, what's happening up in the mountains?

Remarkable achievements from the mountains thanks to the Nevis Landscape Partnership.