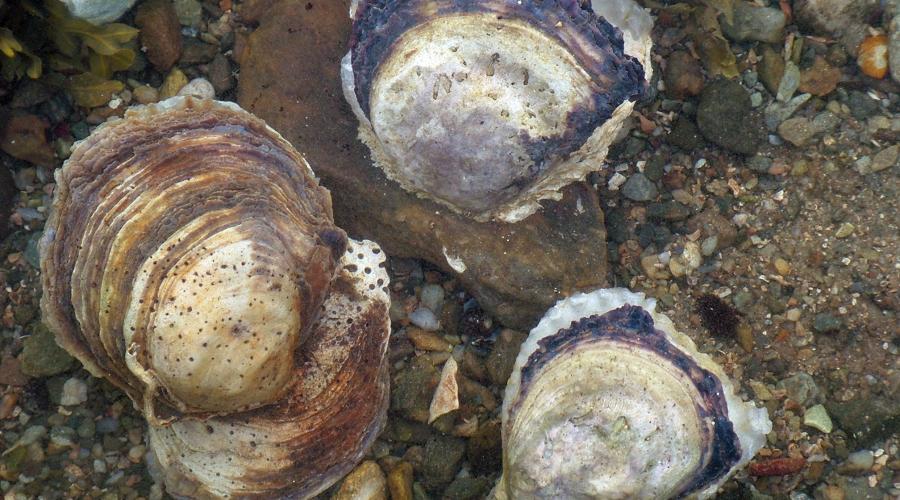 This mollusc once supported vast fisheries in Scotland but now occurs mainly in scattered populations fringing our sea lochs.

The native or common oyster (Ostrea edulis) is a marine bivalve mollusc found in Scotland mainly on our west and north coasts. Its rough, irregularly shaped shell grows up to about 10cm across.

Native oysters live on the seabed in relatively shallow coastal waters and estuaries (from the lower shore to 80m). They prefer habitats sheltered from strong wave action, which tend to be muddy. Oysters also require shells, stones or another hard surface for larval settlement.

The native oyster may live up to 15 years, but six years is more usual. This active filter feeder takes plankton and particulate matter from the water column. Native oysters have an unusual life history: as an alternating hermaphrodite species, an animal may change sex many times during its life.

People have harvested or cultivated the native oyster for centuries. It once supported abundant fisheries in several parts of Scotland, most notably the Firth of Forth. At its peak, at the turn of the 19th century, this fishery produced 30 million oysters per year. Many of which were exported to England and even continental Europe.

This species has been recorded at locations around the whole of UK, from the Thames estuary to the Northern Isles.

Threats to the native oyster

Current threats to the native oyster include:

Scotland today has only one active oyster fishery, at Loch Ryan, and a number of sites where they’re cultivated (on a relatively small scale).

A combination of pressure from harvesting and water quality issues led to the decline of the Forth oyster fishery, which ceased by 1920. Native oysters were found in 1957 to be extinct in the Firth of Forth. There was a similar pattern of decline elsewhere in the UK and continental Europe.

At various times, oysters were imported to Scotland from overseas, to establish or restock fisheries. Such movements risked the introduction of non-native species, including pests and diseases of oysters (e.g. the slipper limpet). But Scotland is still free of most of these.

Learn more about the native oyster on the NBN Atlas Scotland website.

Conservation of the Native Oyster in Scotland: SNH Commissioned Report No. 251 Read about conserving Scotland’s native oyster populations – an ancient and valuable resource, but one that is under threat and needs protection.