Undertaking Muirburn during the bird nesting season has the potential to result in the destruction of nests and eggs of wild birds or to disturb sensitive breeding birds nearby. These activities are potentially offences under the Wildlife and Countryside Act. Therefore, where applications are received to undertake Muirburn between 1st May and 1st August (when breeding birds may be present), we need to ensure that impacts on breeding birds are minimised and that potential offences can be covered by any licence granted.

This document covers the type of information we expect applicants to provide in these circumstances, and describes how we will assess licences. It is summarised as an Annex to the Guidance notes for applicants for out-of-season muirburn licences

Note that we do not require a separate licence application to cover impacts under the Wildlife and Countryside Act – both pieces of legislation will be covered by the same licence.

The legislation protecting birds means that in order to issue an out-of-season muirburn licence that could affect birds or their nests or eggs, we need to be assured that;

Licences can be issued under the Wildlife and Countryside Act for broadly similar purposes as those under the Hill Farming Scotland Act. Therefore, if we are satisfied that an out-of season muirburn licence can be granted, it will generally be taken that there is a corresponding licensing purpose to cover actions that could affect wild birds. Similarly, given that muirburn licences will only be granted as an exception (and justification provided for why the work cannot be undertaken within the muirburn season), we will assume that if the criteria are met for the muirburn aspect of the work per se then we can say that there is no satisfactory alternative in respect of impacts on wild birds.

What are the key species involved?

There are a number of bird species that could be affected by out-of-season muirburn (see list in Annex A). However, the most important from a conservation perspective are those that are either on Schedule 1 of the Wildlife and Countryside Act and/or ‘red-listed’ as Birds of Conservation Concern’.

NatureScot considers that those species for which out-of-season muirburn would pose most risk are therefore hen harrier, merlin, golden eagle, peregrine, black grouse, dunlin, ring ouzel and twite.(see Annex A)

How to know if they may be affected by burning

Most burning is unlikely to affect these more rare or vulnerable species. However there are key habitat types that if present should trigger further investigation of the breeding birds present:  Even if these habitats are not within the areas to be burnt the burning could still disturb breeding Schedule 1 species nearby. Likely distances at which activities may disturb these species are provided in Annex A.

Heather 30 - 70cm tall: In the UK hen harriers nest on the ground, generally in dry, well drained locations. They prefer heather with an average height of 46 cm although nests have also been recorded in rushes, bracken, willow, purple moor grass, mature bog myrtle, open and closed canopy plantations (in rank vegetation in clearings or rides) and restocked forestry. Merlin also prefer to nest on the ground in heather-dominated habitats but will nest on boulders and crags, and in the disused tree nests of other species. If nesting on the ground, the heather around the nest site is normally 30 - 70cm high. Short eared owls breed in heather, tall rushes, grass or bracken, also preferring vegetation at least 30cm tall.

Gullies with heather, bracken and  possibly  trees:  Bracken and long heather (25 to 60cm) in gullies appears to be associated  with the nest sites of both twite and ring ouzel.  The presence of trees amongst bracken stands is also attractive to nesting whinchats.

Wet flushes, pool systems and mires: These areas are used as either nesting sites or as feeding sites by moorland waders like dunlin, snipe, golden plover and curlew.  They are also used by black grouse.  Adult female black grouse will often feed on the seeds of cotton grass and will bring their chicks to damp areas to feed on invertebrates.

Crags, cliffs and ledges: These areas may be used by nesting golden eagle or peregrine in particular.

If a proposal will affect any such area then we would expect information to demonstrate that these species are not present. If reliable information is not available then it is unlikely that a licence will be granted. It should also be borne in mind that the Muirburn Code states that burning in gullies, bracken, and some bog areas should also be avoided.

There are established survey methodologies for all the species listed in Annex A to this document.  Annex B contains details of where these methodologies can be found and other sources of bird information.

What information do we expect an applicant to provide?

Where applications are received for burning during the bird breeding season we would expect an applicant to provide;

The minimum information requirement is details of the presence or absence of these habitats and species in the area to be burnt and within a buffer around the area to be burnt. The buffer should include the disturbance distance of all species likely to be disturbed by the burn e.g. up to 1000m in the case of golden eagles (see Annex A and here for detailed information on disturbance distances

Out-of-season muirburn licences are generally expected to cover relatively small areas and a small number of circumstances.  Therefore it is extremely unlikely that out of season muirburn could on either an individual burn basis or at a cumulative level adversely affect the conservation status of any of the more common species (i.e. non Schedule 1 or BOCC redlist species) at a regional level.  However, if Schedule 1 or red-list species are present we would be unlikely to grant a licence.  However, assuming that the application meets the other criteria for out-of-season muirburn we may be able to licence the work after the breeding season.

What mitigation might we expect to be employed if an area is to be burnt and birds could be present?

Annex 1 of the Birds Directive

Schedule 1 of the Wildlife and Countryside Act 1981 (as amended)

Species on Schedule 1 on of the WCA are generally the rarest species in the UK and are protected from being disturbed at their nests.

BoCC is a quantitative assessment of the threats to UK bird species and red listed species are those of greatest concern for reasons like having very small populations or their populations have undergone steep declines in recent years.

Other sources of information: 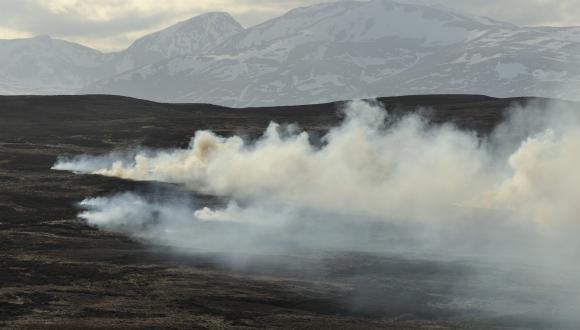