The sight of large numbers of dead or dying bumble bees on the ground may be alarming, but the phenomenon is fairly common and usually not related to human actions. There are several natural causes of bumble bee mass mortality.

Worker bumble bees have relatively short lives – four weeks is the average lifespan. At the end of the season, only the new queens will live to establish new colonies the following year - the rest of the colony dies. Old bumble bees often can be identified by their ragged wings. Additionally, all bees chuck out debris and dead bees from their nest to maintain hygiene, so a cluster of dead bumble bees could mean that there is a nest nearby, even though you may not see it.

A spell of cold weather after a reasonable warm period may kill bumble bees and other bees as well. Large number of deaths may also happen if the temperature dips suddenly and severely, usually in the early evening, catching bees outside the nest.

Many bumble bee species live as small colonies in burrows in the ground, or within walls and banks. If heavy rainfall floods the nest, the bees become waterlogged and may drown or be killed by the cold.

Several species of birds, great tits in particular, attack bumble bees. Bumble bees killed by birds often have the contents of their abdomen removed, as the birds usually attack the hind end first to remove the bee’s sting.

Bumble bees are victims of several viruses, bacteria and other microorganisms that debilitate and often kill their hosts.

Large numbers of dead or dying bumble are often found around some species of lime trees (particularly silver lime, Tilia tomentosa), and it has been proposed that natural chemicals in the nectar of these trees are poisonous to bumble bees.

However, recent research has failed to detect any harmful components in lime nectar. Seasonality is the most likely explanation for the phenomenon; lime trees produce lots of nectar, but its volume drops considerable towards the end of the flowering season. Bumble bees keep visiting lime trees, as there are few alternatives at that time of the year. But by then bumble bees are reaching the end of their lives, and have less vitality to get going. So they waste a lot of energy for a meagre return, and eventually they become lethargic and die.

We don't fully understand this process, but the starvation hypothesis would explain why honey bees are immune to the lure of lime tree nectar - they have honey stores back at the hive.

What if a bumble bee seems to be too weak to fly?

A grounded bumble bee may be sick or old; there is nothing you could do. But it may be just too cold or have run out of energy. In these cases you could pick her up with a piece of paper or card, put her somewhere warmer, and feed her with some sugar dissolved in water (about 1 part sugar, 2 parts water). Place a few drops of this solution within her reach, but be careful not to wet her or let her drop in the liquid. When she has warmed and fed, she may fly off.

However, this is an emergency measure to try to recover a single lethargic bee; do not leave a supply of sugary water in your garden. The solution contains carbohydrates of poor nutritional value and incubates pathogens, so bees feeding repeatedly on sugar water solution may die. 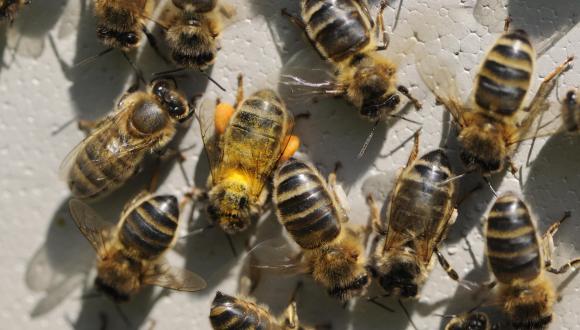