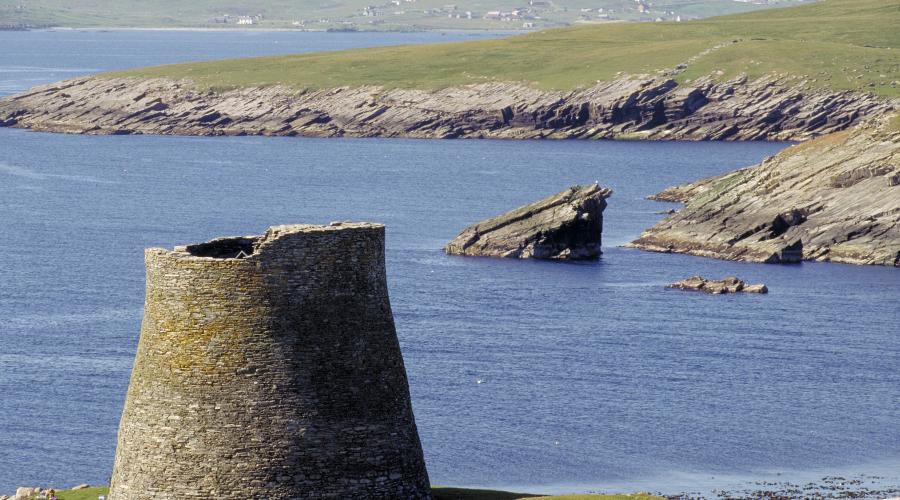 NatureScot is advising public landings stop on the island of Mousa in Shetland, to limit the spread of avian flu and give seabirds the best possible chance to survive and recover from the current severe outbreak.

The island joins the list of 23 other Scottish islands where public landings were advised to stop until chicks have fledged. The Mousa Boat will stop running trips to the island from 30 July for the remainder of the 2022 season. Historic Environment Scotland is also closing Mousa’s famous Iron Age broch until mid-October.

Mousa is home to around 11,000 breeding pairs of European storm petrels, known as alamooties in Shetland, representing 2% of the entire global population of the birds. Several hundred breeding pairs make their home within the walls of Mousa Broch. NatureScot has assessed that the risk of visitors moving the avian flu virus around the island on their footwear and inside the broch is too great.

NatureScot considered all possible routes of infection for these small and elusive seabirds.  Storm petrels seldom mix with other seabirds, as they feed far out to sea during the day and only come ashore under the cover of darkness. The virus that causes avian flu can survive for many days on bird faeces and soil. There is a high risk of petrels landing and picking up the virus where visitors have walked both inside the broch and at other places where they nest on the island.

Eileen Stuart, NatureScot’s Deputy Director of Nature and Climate Change, said: “Restricting visits to Mousa was not an easy decision, but we are increasingly concerned about the terrible effect avian flu is having in Shetland’s seabird colonies.

“Together with the Scottish Government and the Animal and Plant Health Agency, we have looked at biosecurity measures to allow the broch to remain open to the public while the storm petrels are nesting. However, the logistics of getting enough clean water out to the broch and ensuring that visitors can clean and disinfect their footwear adequately has proved too challenging for this season.”

Helen Moncrieff, RSPB Scotland’s Shetland Manager, said: “We greatly appreciate the decision to stop running the boat service to Mousa to give the precious seabirds on the island the best chance of survival during this devastating outbreak of avian flu. Storm petrels breed all around the island, including the Broch, and draw thousands of visitors to the reserve.

“The impact avian influenza is having on tour operators is incredibly tough, particularly after the last few years. We are grateful for the sacrifices that The Mousa Boat company, and other tour operators elsewhere in Scotland, are making to help limit the spread.”

NatureScot considered the existing biosecurity measures were adequate for visitors walking round the island on the footpaths but not for entering the broch. Mousa Boat took the difficult decision to stop running because there are not enough passengers to make running the service viable if the broch is closed. Visiting cruises, recreational boats and sea kayakers are requested not to land on Mousa until mid-October as there are currently no biosecurity arrangements in place on the beach by the jetty and there are storm petrels and Arctic terns nesting at the other potential landing sites.

NatureScot will review this risk assessment in March 2023 in the light of research into how avian influenza virus spreads on different surfaces and information about the predominant strain of the virus circulating in wild bird populations. This information will be used with the aim of devising effective biosecurity measures to keep Mousa Broch open to visitors while protecting the storm petrels from avian flu.

The island of Mousa, off the east coast of Shetland, has been managed as an RSPB reserve since 2001. Mousa Broch is managed by Historic Environment Scotland and is the tallest surviving broch in Britain with drystone walls reaching over 13 metres in height.

Mousa is an important tourist attraction, with a regular ferry service including special night-time excursions during summer months to enjoy the spectacle of returning storm petrels. The Mousa Boat usually runs regular boat trips for visitors between Sands Ayre and Mousa from the beginning of April to the end of September. It is estimated that over 5,000 visitors per year come to see Mousa’s broch, as well as other historic sites and wildlife, including a number of parties landing from cruise ships.

The public is urged to report all sightings of sick or dead birds to DEFRA on 03459 33 55 77. Members of the public should avoid touching sick or dead wild birds. Visitors to coastal areas are encouraged to keep dogs on a lead to avoid them touching or picking up dead birds. More detailed information is available on the Scottish Government website.

For other coastal locations owned by NatureScot, other organisations and land managers, we are asking the public to behave responsibly during this unprecedented outbreak and not to take access through seabird colonies for the rest of the breeding season. This approach gives the best chance to limit the spread of the H5NI virus by human activities and gives colonies the best possible opportunity of survival and recovery by reducing any additional stress.