The island of Noss is renowned as one of Europe's finest wildlife sites.  Its 180 metre high sea cliffs - dramatic at any time of year - come to life in summer when tens of thousand of seabirds return here to nest.  This small island has one of the most easily reached seabird colonies where you can experience these wonderful creatures close-up.  Come to Noss and discover for yourself the sights, sounds and smells of this seabird skyscraper.

The island of Noss is renowned as one of Europe’s finest wildlife sites. Its 180 metre high sea cliffs – dramatic at any time of year – come to life in summer when tens of thousands of seabirds return here to nest. This small island has one of the most easily reached seabird colonies where you can experience these wonderful creatures close-up.

Come to Noss and discover for yourself the sights, sounds and smells of this seabird skyscraper.

The moorland heart of Noss is the stronghold of the skuas. Both Arctic and great skuas nest on the ground, laying two eggs in a shallow scrape. When the fluffy chicks hatch they leave the nest and are good at hiding amongst vegetation.

The adult birds defend their nests aggressively, swooping on anything that comes close. Skuas rarely make a direct hit, but if you’re attacked then hold your hand or a stick above your head to deter them. Please don’t try to hit them – remember, they’re only protecting their young.

The Arctic skua (or ‘skooty allan’ in the Shetland dialect) is a slim, sharp-winged bird with a central tail plume. It lives almost entirely by stealing fish from other birds.

Arctic skuas used to breed in large numbers on the island. However, their bulkier relative, the great skua or ‘bonxie’, has gradually edged them out. Over 400 pairs of globally rare bonxies nest on Noss, making it the fourth largest colony in the world.

The Noup of Noss is a familiar landmark to seafarers approaching Lerwick from north or south. Rising to 180 metres, these are the highest cliffs on Shetland’s east coast.

The shallow, sandy seabed to north and south is a spawning ground for sandeels. These tiny fish are the staple food of many seabirds. You may see dense shoals of them beneath the boat as you cross to the island.

25,000 guillemots crowd the lower ledges. The females each lay a single egg directly on the bare rock. Their close relative the razorbill nests here too, but chooses more secure sites in holes or under boulders.

As you walk around the high cliffs you can’t miss the noise and smell of 12,000 pairs of gannets (known as ‘solan geese’ in Shetland dialect). Gannets are Britain’s largest seabirds and plunge from heights of up to 30 metres to grab fish beneath the surface.

Fulmars (known locally as ‘maalies’) defend themselves by spitting foul-smelling oil at attackers. Even newly hatched chicks can spit, so don’t get too close!

If you sit quietly watching puffins (known locally as ‘tammie nories’), you’re likely to find they are as interested in you as you are in them. Puffins generally mate for life and return to the same cliff top burrow year after year. After spending the winter apart at sea, bill rubbing helps to restore the bond between the pair.

Other birds you might notice around Noss are shags and black guillemots or ‘tysties’. In May and June the territorial ‘drumming’ noise of snipe and the calls of dunlin can be heard over the moorland. Lapwing and oystercatcher prefer grassy areas, whilst ringed plovers lay their beautifully camouflaged eggs amongst the pebbles on the beaches – so please mind where you tread!

Look out for harbour seals and grey seals around the shores of Noss. You may even spot an otter – they’re often seen around the southern coast of the island. Listen out for porpoises, especially in Noss Sound – on calm days you’ll often hear a loud puff as they come up for air.

Roseroot, red campion and sea campion are amongst the many flowers that form a natural rock garden on the sea cliffs. They survive here because they’re beyond the reach of grazing sheep and fertilised by bird droppings. Brown moorland covers the centre of the island and is made up of heather, crowberry, common cotton grass and heath wood-rush. You’ll find occasional splashes of colour where lousewort, heath spotted-orchid and milkwort flower.

It is advisable to take food and drink as well as warm waterproof clothing as the Noss weather can be very changeable. Two wardens are based at the visitor centre all summer and one of them is usually on hand to answer questions.

NatureScot and the island owner manage Noss under an agreement. As well as being a National Nature Reserve, the island is part of a sheep farm and a fine example of how farming and wildlife can co-exist. Please leave all gates as you find them.

The island’s name comes from the Norse word for ‘nose’, possibly in the sense of a headland. The Norse who arrived in the 8th century were far from being the first on Noss though – perhaps 2000 years before, Neolithic families had settled here. Islanders worked this fertile land and kept livestock continuously until the 19th century.

In 1870 the Marquis of Londonderry leased the island for use as a stud farm. He bred Shetland ponies to work underground in his coal mines in northern England. The restored pony pund, built to house the mares, can be seen next to the buildings near the landing.

In 1633 a cradle was strung from ropes connecting Noss to the detached stack of the Holm of Noss. This gave islanders access to gulls’ eggs, but later a larger basket provided carriage for up to 12 sheep. The cradle operated for over 200 years and numerous sketches and narratives were made by visitors and passing mariners. Visitors attracted by the cradle notably included Sir Walter Scott in 1814.

Sheep farming continues today on Noss. For most of the year the sheep are free to wander where they choose but during lambing they are brought onto the better ‘inbye’ land to the west of the dry stone hill dyke. 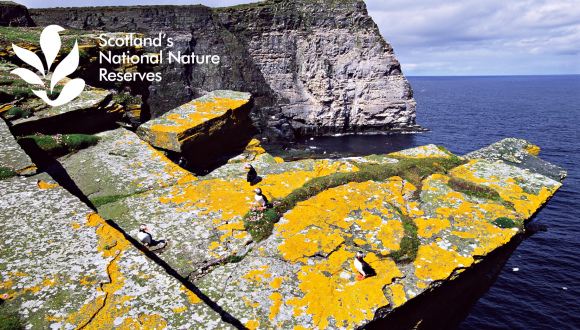 A dramatic island with soaring cliffs, Noss is home to an amazing array of nesting seabirds, forming a vibrant community of vertical living.