This study repeated a survey carried out between 2002 and 2010 at sites along the entire rocky coastline of Scotland. The 2014/15 survey was extended to include the Shetland Islands.

The main aim of the study was to look for changes in the geographical distribution and abundance of species in the context of recent climate change – principally temperature change – on both short- and long-term timescales.

Rising sea surface temperature has been, and continues to be, a general trend seen since 1980. But no increase in temperature was recorded between 2010 and 2014.

No northward range extensions of species reaching their poleward geographical range limits were evident. The study did, however, note changes in abundance across Scotland: declines in blue mussel and increases in macroalgae were recorded.

A Community Temperature Index was developed to measure spatial and temporal changes in the balance of a suite of warm and cold water species. There was a slight shift towards cold water species between 2002–2010 and 2014–2015. 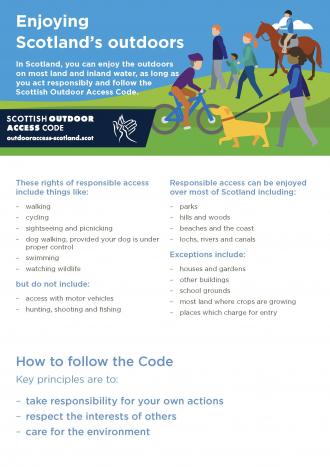 In Scotland we have some of the best access rights in the world. This leaflet explains how you can enjoy the outdoors responsibly.

Green Health Week graphics, and 5 Ways to Wellbeing in Nature.