Besides the familiar bumble bees and honey bees, which live in colonies, there are approximately 220 species of solitary bees in the UK. They are called 'solitary' because each bee builds individual nests for their larvae, although some may do so communally. Most solitary species nest in tunnels or holes in the ground. Other bees, and some wasps as well, build their nests in naturally occurring cavities, from cracks in stones to hollow stems of dead plants or holes in wood made by wood-boring insects. These cavity-nesting bees and wasps readily occupy artificial nests made of drilled wooden blocks, paper tubes, or bundles of reed or bamboo stems.

Once a bee or wasp occupies a cavity, it begins constructing a series of compartments (brood cells), each provisioned with pollen and nectar (in the case of bees) or paralyzed insects (wasps) as food for its offspring (Figure 1). When the cells are finished, the nest entrance is sealed with a plug made of mud or leaves, depending on the species (Figure 2). The eggs soon hatch and the larvae develop by eating the pollen and nectar mixture (bees) or prey (wasps). The larvae then pupate, and after a period of dormancy, which may extend to the following year for some species, adults emerge to start the cycle over again.

A number of cavity-nesting species are common in gardens, and they may be useful as pollinators of fruit crops (bees) and pest-control agents (wasps). Gardeners can encourage them by installing bee houses.

However, occupation of bee houses is not guaranteed: it will only happen if cavity-nesting bees occur naturally in the area. If not, even the nicest bee house will remain empty! (Retailers usually do not inform the buyers about this detail).

How to use a bee house

There are several types of nest for sale, some of them quite expensive. However, many are inadequate and will not be occupied. Even worse, they may be harmful to bees. Marc Carlton, who runs the Pollinator Garden website, and Xerxes Society (an American organisation dedicate to the conservation of invertebrates) have provided detailed information of how to choose or build bee houses, and how to maintain them.

These are the main requirements and aspects to avoid:

Other species that may occupy bee houses in Scotland are:

Bee houses may attract unwanted guests as well (that is, from the bee’s perspective): ruby-tailed wasps such as Chrysis ignita and cuckoo wasps like Pseudomalus auratus are mostly parasitoids* or cleptoparasites** of other insects, generally other solitary wasps and bees. These tiny and colourful wasps do not occupy bee houses, but rather patrol their surroundings in search of hosts. Some of these wasps are rare and endangered.

* Insect parasitoids have an immature life stage that develops on a host, ultimately killing it.

** Cleptoparasitism (meaning "parasitism by theft") is a form of feeding in which one animal takes food from another that has caught or collected it; in the case of cuckoo bees, they lay their eggs on the pollen of other bees or wasps. 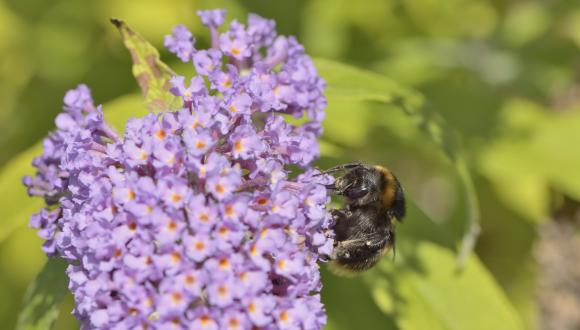 The Pollinator Strategy for Scotland 2017-2027 sets out how Scotland can continue to be a place where pollinators thrive, along