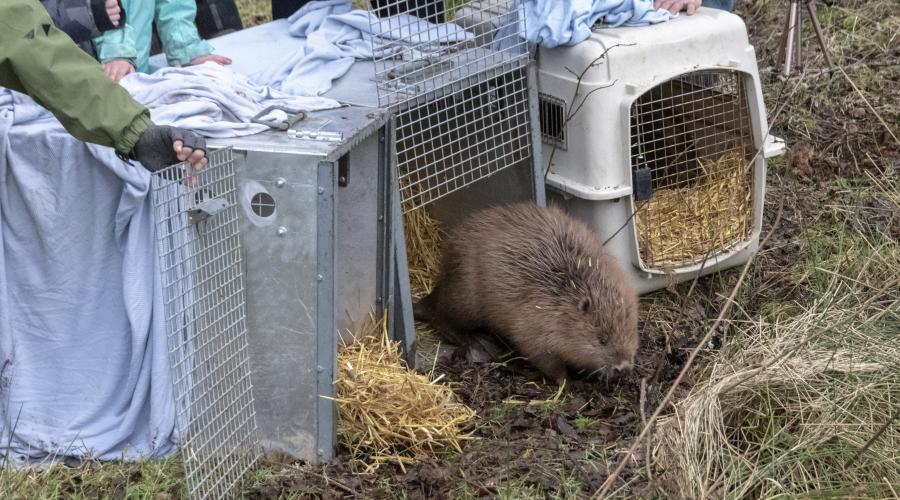 A second family of beavers was moved to a Perthshire family farm late last week (11 February), reinforcing the five beavers already relocated there in November last year and boosting the biodiversity of this special area.

The five beavers were moved to the Argaty Red Kite centre near Doune. The move, known as a translocation, was carried out by charity Beaver Trust.

This is only the second translocation site authorised in Scotland; the first was the beaver reintroduction trial site in Knapdale in Argyll. The beavers were trapped and taken under licence from areas where they are causing serious agricultural damage for farmers and where mitigation measures have not been successful or are not possible.

Tom Bowser, owner of Argaty Red Kites, said: “We are thrilled to be Scotland’s first private site to legally release beavers into the wild. It will be so exciting to see how they enhance biodiversity on our farm.”

Beaver dams create nature-rich wetlands that benefit many other species, including amphibians, invertebrates and fish. The dams also improve water quality, moderate water flows and reduce downstream flooding. In addition, selective felling of trees by beavers can increase the biodiversity within riparian woodland. For example, one anticipated benefit at Argaty is the reduced shading of pond edges, which will improve habitat for breeding damselflies and dragonflies.

Donald Fraser, NatureScot’s Head of Wildlife Management, added: “Beavers can play an important role in helping to restore biodiversity and respond to the climate emergency in Scotland. Projects like this one at Argaty also allow beavers to be trapped and removed from highly productive agricultural land where they are causing damage to farmland and released in an area where nature will benefit and there is less risk to agriculture.”

Roisin Campbell-Palmer, Spokesperson for Beaver Trust, said: “The translocation of this beaver family can be considered a success, with both parents and all seen offspring trapped over a short time frame with full engagement of the landowner, lots of positive familial behaviours observed with all individuals eating well and completing health screening checks. Being able to release these beavers as a well-bonded family unit feels like we are giving them the best chance for relocation success and away from prime-agricultural land where they were causing a significant issue. We look forward to being able to expand such work in the future.”

Argaty is a working farm and popular visitor attraction that is home to an award-winning red kite project. It is a founding member of the Northwoods Rewilding Network, operated by rewilding charity SCOTLAND: The Big Picture.

Translocations of beavers can only take place under strict circumstances by trained experts under licence. The beavers are trapped in line with best practice and undergo appropriate health screening before being released.

Donald added: “In assessing this licence application, we listened to concerns expressed in the Argaty area from local farmers, who are concerned that the translocated beavers will move quickly into burns on their land and potentially flood land and cause damage to heritage and other trees. We’d like to assure these farmers and other land and fisheries managers that our mitigation scheme is available to help them with any issues which arise and that our assessment is that, on balance, the expected benefits will outweigh any negative impacts.”

A team of NatureScot staff and contractors including the Beaver Trust support farmers and other land managers with mitigation measures when needed, such as tree protection, exclusion fencing and installing flow devices in beaver dams. In 2020, 68 active mitigation projects were progressed.

Beavers, whether alive or dead, are protected under the Conservation (Natural Habitats, &c.) Regulations 1994. If you have a dead