Welcome to Forvie National Nature Reserve, managed by NatureScot. Shifting sands blown into towering dunes, a wide estuary of mudflats, open heathland dotted with summer orchids, a home to thousands of birds. Forvie is one of Scotland’s most dramatic stretches of coast. The wind and the tide are in charge here, and it’s a great place to blow the cobwebs away!

Dune landscapes are amazing places, and Forvie is one of the largest, most natural dune systems in the country. The great waves of sand change constantly, moved by the wind and tide. Where tussocks of marram grass take hold, their roots bind the shifting grains. Gradually, flowering plants and low shrubs cover this more stable ground, creating coastal heathland: another environment for which Forvie is one of the best sites in Scotland. In summer the heath is covered in jewel-like wild flowers.

The heathland flowers are wonderful for moths and butterflies like the dark green fritillary. Only the under sides of its wings are green: you’re more likely to see the colourful orange top sides, patterned like intricate stained glass. They’re around between June and August.

Forvie’s other special environment is the wide estuary of the river Ythan. Like the dunes, it’s one of the most natural examples of this habitat in Britain. The mudflats and saltmarsh are full of shellfish and worms, making the estuary a vital winter food source for birds like redshank and shelduck. Watch for them from the Waulkmill Hide or the Riverview car park. In spring and summer, you might see flocks of eider ducks on the water and delight at their wooing sounds. Resting seals hauled out at the mouth of the river are best enjoyed from the opposite shore, near Newburgh golf course. A short walk onto the beach here allows you to enjoy watching the seals, while their curious faces watch you from the water.

The Stone Age and Bronze Age

Stone Age and Bronze Age people lived and hunted here before the sands came. Among the dunes there are traces of their lives, like the mounds of shells or middens they left behind. Later, a small village stood just inland from the coast at Rockend. It was swallowed by the dunes sometime in the 1400s: now only congregations of walkers meet in the ruins of the kirk.

But if the shifting sand makes it difficult for people to live here, it’s great for birds. Forvie has the largest breeding population of sandwich terns on Scotland’s east coast: they nest in their hundreds in the dunes near the sea. These elegant birds have an enchanting courtship ritual, with the male offering fish to the female. We take special care to protect their nests from foxes, and keep the nesting area as a sanctuary while the birds are there.

Follow the yellow dotted line.
This path leads from the Forvie Centre to the Sand Loch and back. Look out for tufted ducks and gulls on the water and enjoy the views from the seats. Gravel path with some loose stone. One narrow gate (95cm width). One short moderate length slope and several gentle slopes. Occasional seats.

Follow the red dotted line.
This circular trail meanders through quiet heathland with the ground carpetted in heather, crowberry and lichens. The best time for wild flowers is May and June. If you get tired, a shortcut gives a shorter route of 1.4 miles (2.2 km). A varied path with gravel surface, uneven sand and grassy sections and with some wet, muddy patches. Narrow sections and several short slopes.

Follow the blue dotted line.
This path leads past the estuary, through Forvie’s dramatic dune landscape and out onto the wide open beach. On the way back you’ll pass near the ruins of Forvie Kirk and the site of the village, engulfed by sand in a nine-day long storm. For an easier option you can follow the path alongside the estuary “there and back” to a viewing area. A rough, mostly grass and bare sand route, which is muddy and narrow in a few places. One burn crossing. Many slopes ranging from long and gentle to short and steep. One seat at 200m and another at 800m.

Follow the white dotted line.
Hackley Bay is a stunning hidden bay and makes a great extension to either the Dune or the Heath Trail. A varied path with narrow, uneven and muddy sections. Short boardwalks with handrails over the wettest sections. A few short steep slopes including uneven steps (pitching) down to the beach. 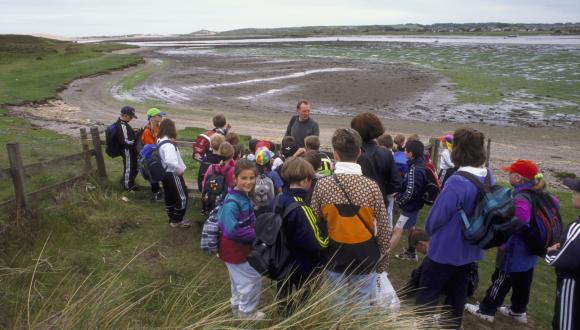 Forvie is a glorious place for an invigorating coastal walk at any time of year. 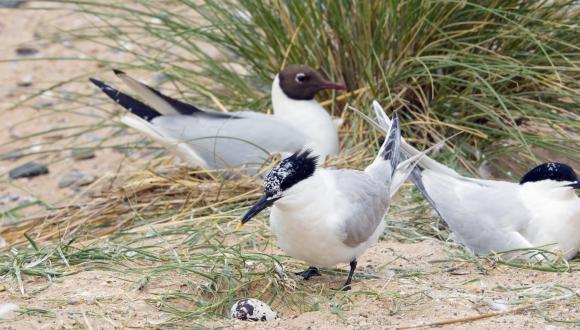 Forvie NNR - About the reserve

Learn more about how we manage the reserve and its protected areas and provide a place to inspire visitors to enjoy nature.