A five-month multi-agency campaign to highlight the reality of livestock attacks and trauma by dogs was launched today (January 8th, 2019) at Penicuik House, Penicuik Estate, Midlothian by the Scottish Partnership Against Rural Crime (SPARC).

The aim of the campaign - "Your Dog - Your Responsibility” is to ensure dog owners understand the distressing nature as well as emotional and financial impacts such incidents can have, not just on farmers but everyone having to deal with the aftermath.

Experience has shown that more often than not, livestock attacks and trauma occur when dog owners living, working or enjoying the rural environment, are not present. Regardless of whether a dog has been let off a lead and not obeyed commands, whether someone else was in charge of the dog at that time; or through the increasing number of dogs left alone at home or in gardens then escaping, owners are reminded that they must take responsibility for the actions of their dog.

The campaign draws attention to other animals such as camelids, including alpacas and llamas, plus horses due to reports being received of these animals being attacked with increasing frequency as these animals are currently not included under the definition of 'livestock’.

Over the next few months, local events will be held around Scotland concluding in May at Conic Hill, Balmaha, which is located within the Loch Lomond and Trossachs National Park. It is hoped by having a harder-hitting message that reaches communities throughout Scotland, that it will encourage farmers and landowners to report all instances of attacks and trauma to their animals.

SPARC is made up of partners from across the rural community, including Police Scotland, NFU Scotland, Scottish Land and Estates and NFU Mutual. This new campaign complements work being done by rural organisations to combat livestock worrying and the impact it can have on farmers and landowners.

"Further work requires to be done in highlighting not just the message about an owner or person responsible keeping a dog on a lead if there is livestock nearby, but a more general awareness message regarding responsible dog ownership, both in the home and when outside. To that end, SPARC is launching this campaign with key messages of of awareness raising, education and prevention."

Gemma Cooper, NFU Scotland’s Head of Policy, commented, “There is no excuse for dog owners allowing their dogs to worry livestock. The trauma and suffering caused by livestock worrying is a real and growing issue for the agricultural industry.

“NFU Scotland is pleased to be a part of this campaign. I am hopeful that by continuing to raise awareness of this problem, and the impact it can have, that we can encourage the general public to make sure that they are responsible for their dogs.”

Karen Ramoo, Scottish Land and Estates, said, "We want everyone to enjoy our countryside but it is important that dog owners exercise caution when it comes to our rural areas. It is vitally important that owners understand the huge distress that is caused by dog attacks on livestock, whether it be the pain these animals suffer or the emotional and financial distress that can be caused to farmers. Despite high profile campaigns over many years we are still seeing too many incidents of livestock attacks and trauma in our rural areas, often where dogs are being let off the leash or being left unattended and escaping from homes and gardens.

"Many of these incidents occur due to a misheld belief that their person’s dog is not capable of attacking livestock. Our message is to not take that risk and make sure your dog is well controlled throughout our countryside.”

Stephen Jenkinson, Kennel Club Access and Countryside Advisor, said, “Repeatedly allowing a dog to stray is a clear sign of irresponsible ownership; it needlessly puts dogs’ lives at risk, as well as farm animals and wildlife. We encourage the responsible majority of dog owners to report strays and support local councils in targeting the irresponsible minority at an early stage using Dog Control Notices.”

Mark Wrightham, NatureScot, said, “We want people to enjoy Scotland’s outdoors, but it’s vital to avoid the risk of livestock attacks, which can be devastating to those who are affected. It’s therefore essential to follow the Scottish Outdoor Access Code. Keep dogs on a short lead or close at heel when livestock are around, staying as far away as possible, and don't take your dog into fields with young animals.”

Welcoming the new initiative, Tim Price, Rural Affairs Specialist at NFU Mutual, said, “As the insurer of most of Scotland’s farmers we are acutely aware of the distress and financial impact dog attacks on livestock are having.

“Our claims figures show that dog attacks on sheep and cattle in Scotland quadrupled in in the last two years and are running at an all-time high – costing Scottish agriculture over £300,000 a year.

“We are particularly concerned that many recent attacks appear to involve dogs whose owners allow them to roam unsupervised from their homes and are either unaware or unconcerned that they are killing and injuring sheep.

“We believe a strong co-ordinated approach involving Police Scotland, the NFU, farmers and responsible dog owners is required to tackle this problem." 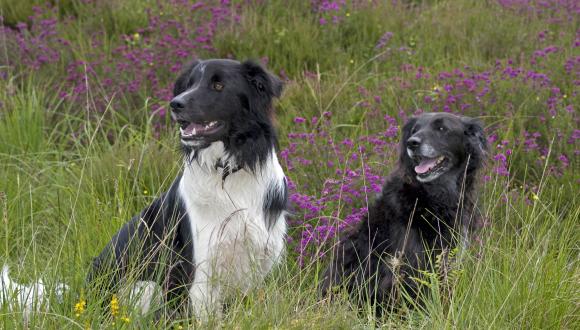 Dog owners are being encouraged to take extra care around livestock when enjoying the great outdoors this spring.