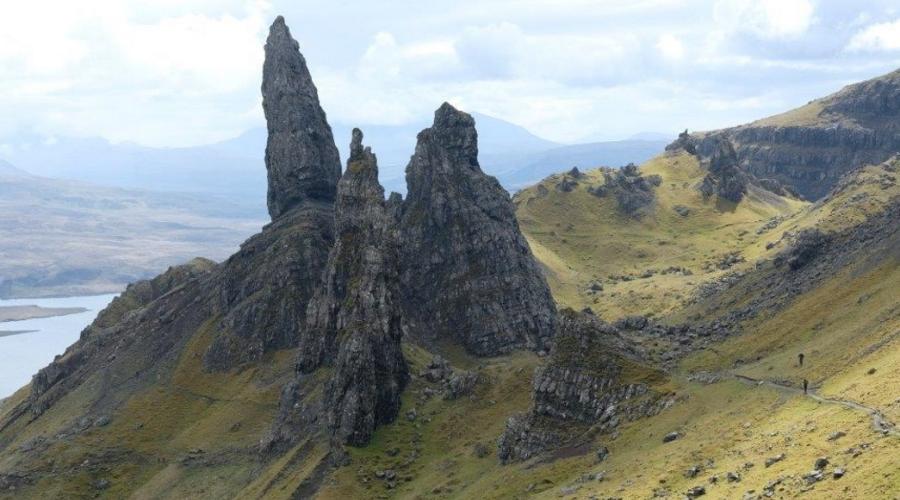 Misty Isle with a clear vision

The name Skye is said to reflect long forgotten Norse associations and to be derived from the word for cloud, but for many the Gaelic reference to the ‘Misty Isle’ is better known. Easy to access and hugely popular the island has undergone something of a tourism renaissance in recent years.

Popularity has come at a price. Groaning infrastructure struggling to cope with the influx of visitors is the most obvious sign. But help is at hand. Skye’s Iconic Sites Project has tapped into the Natural and Cultural Heritage Fund to better promote the outstanding scenery, wildlife and culture of the areas.

The Outdoor Access Trust, who will lead on the project, are one of a number of partners and will oversee significant improvements to infrastructure and interpretation at three iconic sites – the Old Man of Storr, the Quiraing and the Fairy Pools. Each site will have improved and more inclusive access, viewpoints, and better coordinated information to give high quality visitor experiences.

Dougie Baird, Chief Executive Officer of the Outdoor Access Trust for Scotland and Manager of Skye’s Iconic Sites Project, gave us a detailed insight into what the project aims to do and how it will deliver a range of welcome improvements.

Dougie, can you give us a flavour of the project?

Skye’s Iconic Sites Project will help to address the chronic lack of tourist infrastructure and co-ordinated interpretation on the Isle of Skye, making improvements to the quality of the visitor experience for a wider and more inclusive range of people at three of its most iconic and busiest sites - the Old Man of Storr, the Quiraing and the Fairy Pools.

This will be achieved through the development of access infrastructure - paths, bridges, and viewpoints; path and habitat restoration and rehabilitation; and a programme of co-ordinated interpretation through information points and signage, together with promotion, marketing and joined up thinking within the wider context of Skye as a visitor destination.

Future proofing all three sites should not only encourage tourists to stay longer and explore other areas of the island, thus increasing the levels of spend; it should also ensure that the reputation of the island is maintained or improved as a ‘bucket list’ visitor destination.

How did this project come about?

In recent years Skye has attracted numerous pieces of unwelcome publicity regarding it being ‘full’ and ‘closed to tourists’.   In 2018 CNN Travel famously listed Skye at number one on the list of tourist places to avoid, entirely due to the sense that it was beyond carrying capacity.

This comes as a direct result of the exponential rise in visitor numbers to the island and its most iconic sites for a number of years.   The Fairy Pools recorded an already unsustainable 80,000 visitors in 2016/17, to more than 180,000 in 2019; while in the same year a massive 240,000 people flocked to the Old Man of Storr.

The island can readily absorb more tourists.  However, a lack of the most basic infrastructure and tourist facilities to enable the most popular attractions to thrive under the increased pressure, access roads have struggled to cope and mountain paths and the surrounding vegetation have been overwhelmed and badly damaged.

This informal collaborative alliance fully appreciates the real value in providing sustainable and long-term solutions to develop natural heritage attractions that can be enjoyed in the coming decades by all.

SISP is tackling the challenges head-on and aims to improve visitor experience and achieve sustainable management of these remote but hugely popular locations.

Is this lack of investment in access infrastructure specific to the Isle of Skye?

Despite their tourism issues being subjected to scrutiny by the UK and international media, Skye is definitely not alone.  The sheer weight of people rushing to Scotland's countryside as Covid-19 travel restrictions are eased has exacerbated the problems with parking at trailheads, fouling and the erosion of popular trails throughout the country.  It has also highlighted the lack of investment in access infrastructure that has been so clearly needed for many years.  This year’s growth is likely to bring a permanent rise in countryside use, as a new generation realise what is on their doorstep.  This is fantastic for health and wellbeing but means increased pressure on the countryside.

Skye’s Iconic Sites Project will provide a template that can be learned from and used elsewhere, so that sustainable tourism development can be achieved in remote and fragile locations throughout Scotland and further afield.

Tell us more about the details of the project?

The access infrastructure will be developed to help a wider and more diverse range of people access all three sites. The main elements of the work, phased over two years, includes the building of an all-abilities path at the Quiraing which will allow less able people, including those in wheelchairs, to get to the key viewpoint overlooking the vista of the Quiraing and the sea.  New bridges at the Fairy Pools will allow less confident and able people to cross the burns without fear of falling in.  The addition of viewpoints at all three sites will allow people to access key areas to best experience them.

The implementation of a comprehensive programme of habitat restoration work is key in arresting and reversing the current rate of environmental degradation experienced at the three locations - erosion scars are as much as 40 metres wide in some places!

The project will also ensure that heritage values are maintained at a sustainable level in order that current and future generations can experience and enjoy all the sites in a much-improved condition.

With a coordinated and iterative interpretive plan the project will help visitors to get the most out of their visit through improved information, interpretation and promotion at all three sites. It will be tailored to the needs of newer, and more diverse types of visitors, and take cognisance of their languages.  An essential element of this will be the authentic and sympathetic use of the Gaelic language and Gaelic culture rather than just a literal translation of local place names and flora and fauna.   Much of the physical information and interpretation will be delivered at the car parks, making it accessible to all, augmenting the basic facilities of parking and toilets.

The aims and objectives of Skye’s Iconic Sites Project are widely supported on the island with new car parks and toilet facilities at all three sites, either in progress or recently completed, via other coordinated initiatives.  The car parks will also deliver an added bonus.  Sustainability of the access infrastructure, habitat rehabilitation, and interpretation at all three sites will be provided via new income streams generated direct from car parking at each of the sites.

How is the project being funded?

The project has a total budget of just under £1 million.  It will benefit hugely from receiving  £650,516 from the Natural and Cultural Heritage Fund (NCHF), led by NatureScot and is part-funded through the European Development Fund (ERDF); with additional partnership funding from the Outdoor Access Trust for Scotland - £98,793, Scottish Government Rural Payments Inspections Division (SGRPID) - £150,000, the Minginish Community Hall Association - £20,000, and Highland Council - £10,000.

The Natural & Cultural Heritage Fund is part of the Scottish Government’s current European Regional Development Fund (ERDF) programme, which runs through to 2023.  This is one of two ERDF Strategic Interventions led by NatureScot – the other is the Green Infrastructure Fund.

You can follow the European Structural Funds blog for ESF activities, news and updates. For twitter updates go to @scotgovESIF or use the hashtags #ERDF and #europeanstructuralfunds. The Natural and Cultural Heritage Fund will encourage people to visit some of the more remote and rural areas and create and sustain jobs, businesses and services in local communities.