Between 1994 and 1999 SNH, in partnership with others, commissioned the national suite of Landscape Character Assessments (LCAs) for Scotland. Most assessment reports covered an individual local authority area. They provided the landscape foundation for natural heritage and planning policymaking and have been used extensively in the development planning system. These documents are now only available as scanned pdfs of the original reports, downloadable from SNH’s website.

The national suite of LCAs is around 20 years old. Since the reports were produced there have been significant advances in digital technology and available data, as well as changes in some development patterns and pressures. The mapping was often difficult to read and/or at different scales. There are places where there were cross-boundary differences between Landscape Character Types (LCTs) in neighbouring study areas. There was also variation in approach and structure between a few LCA studies. Some Local Authorities have undertaken reviews of their LCAs, sometimes as part of capacity or sensitivity studies which subdivided or amended LCTs.

For these reasons, SNH has reviewed Scotland’s LCA studies, at LCT level (i.e. groups of similar mapped units, united by common characteristics), to create a single dataset in a digital version. The revised format is easier to access and mapping is much clearer. This builds on the original LCAs rather than replacing them, as much of the information, including boundaries and descriptions, remains valid.

SNH managed the LCA review, steered by a Core Technical Group comprising representatives from Forestry Commission Scotland, the Cairngorms National Park Authority, Heads of Planning Scotland and SNH. Local Authorities in Scotland and were consulted to check that they are content with any revisions made to the original LCAs. Historic Environment Scotland contributed text on historic and cultural factors.

How did we decide what needed revision?

The results from this work, and engagement with the Core Technical Group, established the principles for the Review. These were:

What work has been done to review the original LCAs?

All of the LCT descriptions have been transferred into a standard format, with a location and context paragraph; bullet point list of key characteristics; and the landscape character description text. Where original LCAs included Landscape Character Areas – geographically specific areas which nest within the LCTs – some relevant information in these descriptions has been included in the reformatted LCT descriptions.

As a result of the internal and external consultation process it was agreed that a few LCAs varied sufficiently from the national suite in structure or approach that they needed to be revised in detail. SNH, in collaboration with the relevant planning authorities and with additional funding from Forestry Commission Scotland, appointed landscape consultants to review the following LCAs;

For all of the other LCAs, where extensive revision was not required, LCT information has been transferred to the new format and updated as required. In some areas other stakeholders (such as Local Authorities and Landscape Partnerships) had done subsequent LCAs or other studies based on LCA (such as wind energy and housing capacity/sensitivity studies). These have been assessed and any boundary issues site-checked by at least two SNH Landscape Advisors.

The text and mapping has been amended where necessary. This was then put through two rounds of consultation with Local Authorities and SNH Landscape Advisors. The helpful comments received have been incorporated.

All LCTs have been attributed a national number, from 1 to 389.

As part of the review work, we looked at LCT naming to ensure a nationally consistent approach. The names of some LCTs have therefore changed. This exercise included:

Photographs in the original LCA suite in scanned pdf format were often reproduced poorly and difficult to interpret. In some original LCAs there are no photographs. The review took the opportunity to include photographs for each LCT.

The original LCA suite had a varied approach to illustration, with some providing general LCT sketches, others having multiple sketches to illustrate certain aspects of character or guidelines, and others none. Whilst it is acknowledged that in some cases the illustrations augment and clarify text, original art work will not be included in the new digital database because of its inconsistent coverage. We consider that better digital photography will be a suitable replacement.

The background chapters from the original LCAs (which give a regional overview of geology, hydrology, soils, human settlement, cultural history, etc.) varied greatly in content and detail. In some areas, such as modern development, they also needed updating. There are gaps in some background chapters which are currently being filled.

For all LCAs the background chapter information is being redrafted into a standard format under 4 section headings:

The maps from the original LCA background chapters will not be included in the 2019 LCA. Many of these contain out-of-date information, and / or Local Authority boundaries have changed due to, for instance, the introduction of National Park Authorities. Also, in several places old LCAs have been grouped together in the 2019 LCA, so that the original maps no longer relate to the correct area.

These sections will be added, once they are completed, to the digitally available LCT information accessible from the digital mapping. This should be in 2020.

Searches on the new digital mapping

The reviewed mapping can be searched by place name and LCT name. We may extend this to other criteria in the future if this is found to be too limited.

The LCT level information can be used by Local Authorities and developers as a framework within which to nest more detailed Landscape Character Area characterisation, should this be necessary, for exercises such as Local Landscape Designation Reviews or individual planning applications.

Local Authorities should use the new digital LCA information in their next Local Development Plan (LDP) review cycle. It is appreciated that the timing of publication of the new dataset may not ideally suit all Local Authorities LDP cycles.

Updating the national LCA in the future

The new digital format should enable the LCA to be reviewed on a periodic basis, for example if information is dated. Based on the longevity of the original LCA suite, we provisionally anticipate that this would be done at ten year intervals.

If you wish to comment on any aspects of this please email lca. Decisions made by professionals may affect Scotland’s nature and landscapes. Our advice and guidance can help to steer any actions positively. 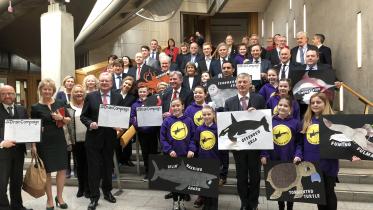