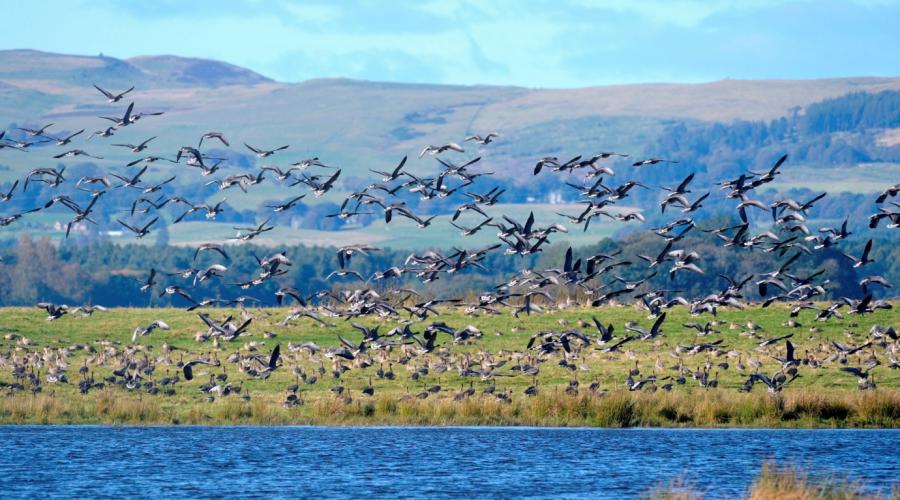 Photographers have captured stunning images of wild geese and waders flocking to Scotland.

“To see a flock of geese as they lift off from their night-time roost is one of Scotland’s greatest wildlife spectacles. It’s such a remarkable aerial display, made even better by the chorus of their high-pitched calls.

“These amazing birds migrate as far as 3,400 miles to reach Scotland for their winter feeding, before returning to more northern climes in the spring. And there’s plenty of time for people to come out to one of our nature reserves over the next few months and see this marvellous display for themselves.”

At Loch Leven, October sees a mass migration of pink-footed geese from Iceland. There may be as many as 20,000 to 25,000 geese at peak times – almost 10% of the global population. The geese are known for their loud honking calls, which can often be heard when they fly in their typical v-formation in large flocks or skeins. There are also high numbers of tufted ducks, coots, teal and pochard with another Icelandic nesting species – the whooper swan – arriving at Loch Leven too. These other species can total a whopping 10,000 to 15,000 birds out on the loch.

At Forvie, there are about 5500 waders, including 12 different species, on the Ythan estuary over autumn. There are good numbers of redshanks, lapwings, curlews, dunlins, golden plovers and oyster catchers. An occasional rarity also shows up at Forvie, this year including a great egret, 10 common cranes – and a terek sandpiper, only the second ever spotted in North East Scotland and the 13th in Scotland.

At Caerlaverock, the entire Svalbard population of 40,000 barnacle geese stay on the reserve for the whole winter. The pink-footed geese on the reserve hit high numbers too, with a peak of 35,000 passing through in October on their way south, of which 3000 to 5000 stay on the reserve to roost. Geese numbers peak again in January, as those from the south start to make their way north.

Scottish Natural Heritage’s (SNH’s) nature reserve staff share their insider tips on the best times and places to see and photograph geese and waders below.

The best place to view birds is from the Kirkgate viewpoint, particularly in the early morning as first light breaks the horizon. The evenings are also good times, with geese returning to roost on the loch. This looks spectacular from any part of the Loch Leven Heritage trail.

The best places to watch them are from the hide at Waulkmill or the two laybys that overlook the estuary north of Newburgh on the A975, where you can use your car as a hide and watch the undisturbed birds. There are also good views to be had by parking at the car park at Waterside and walking down the north side of the river on the Dune Trail.

“These fantastic viewpoints make the Ythan one of the most accessible birdwatching spots in Scotland for waders. The best time to watch these amazing waders is approaching high tide, as the water is moving the birds closer to you.”

The best time to see the geese is at dawn and dusk at the Castle Corner end or Hollands hide. During the day, it’s wonderful watching groups feed out on the saltmarsh. The reserve also supports many waders and ducks. Two highlights are large groups of oyster catchers and golden plovers. It’s possible to see 5000 to 8000 oyster catchers together from Castle Corner or Browwell at high tide, and over 5000 golden plovers from Hollands hide and Browwell. Other waders that inhabit the reserve throughout the winter include redshank, curlew, and lapwing, which are also best seen at high tide. Beautiful whooper swans are seen regularly across the reserve throughout winter as well. For duck lovers, there are a few thousand teal, wigeon, and pintail on the reserve throughout the winter. The best place to see these charismatic birds is the River Nith and Browwell.

For more information about Loch Leven, Forvie and Caerlaverock national nature reserves, as well as the other 40 NNRs throughout Scotland, see www.nnr-scotland.org.uk 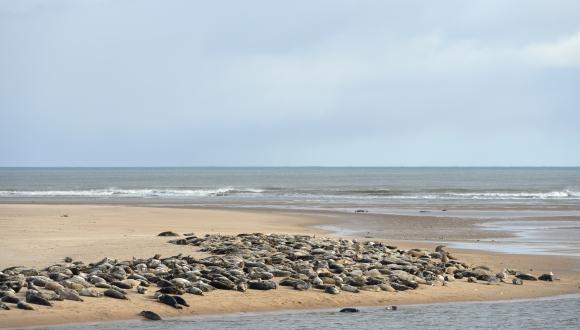 Visit Forvie NNR to enjoy an amazing array of hardy plants and wildlife in a glorious coastal setting.