This Reserve, in the Galloway Hills, is one of the  wildest and remotest corners of south-west Scotland. Dominated by an imposing granite hill, shaped and sculpted by the elements, Cairnsmore offers a true taste of the Scottish wilderness, with superb views over the Cree Estuary, and vistas stretching back towards  the Lake District,as well as out across to Ireland and  north to Ayrshire.

Cairnsmore’s mixture of wind-clipped summit heath, heather moorland and blanket bog supports a wide range of wildlife. This includes some of Scotland’s most iconic birds, such as red and black grouse, the occasional golden eagle, as well as intriguing plantlife that manages to eke out an existence in the harsh conditions.

Open access and three suggested walks allow visitors to explore the bleak but beautiful surroundings, which are set off by several beautiful sculptures designed to blend in with the landscape.

If you had been here 18,000 years ago, you would have been under a glacier! The ice carved out deep corries in the hillsides, and scoured the Clints of Dromore. Mud and rocks dragged along under the moving ice were dumped by the glacier as it melted, forming small ridges called moraines. The landscape at Cairnsmore has been managed by man for hundreds of years. Once heavily forested, the Romans began the clearance of much of Galloway’s ancient woodlands.

The earliest evidence of man’s cultivation of the land are Bronze Age remains found just to the south of Cairnsmore, and in medieval times, the land was used for grazing sheep and goats, as well as hunting.

After the introduction of ‘enclosures’ during the 1700s, when many small tenants were cleared from the land, large flocks of sheep dominated the hills, while some people scraped a living mining for lead and other minerals. The railway arrived in 1860, with the impressive 20 arch viaduct that straddles the River Fleet still standing today. It was built to carry the railway to Stranraer and led to a boom in grouse shooting and deer stalking on the moors.  After the Second World War, much of the surrounding area was planted with coniferous forest, and in 1975, 2,000ha of Cairnsmore of Fleet became a National Nature Reserve.

Ditches and pools come alive as frogs, toads and newts start to spawn.

Enjoy wildflowers such as devil’s bit scabious, harebells and ragged robin, as they bring a splash of colour, while migrant birds like wheatears also begin to arrive. Listen out for the distinctive call of the stonechat – like two stones being knocked together – and, of course, the unmistakable cuckoo. During warm summer mornings you may also be lucky enough to spot an adder, basking in the sun.

Watch aerobatic swifts swooping and diving as they begin to arrive and nest on the towering Big Water of Fleet viaduct, while dragonflies and damselflies flit across the bogs and ponds. You can also see the white bobbing heads of bog cotton nodding in the wind and the delicate pale purple petals of the heath spotted orchid.

Marvel as the open hill trembles to the roar of rutting stags.

Hen harriers visit; sweeping the heath for food, the male recognised by his blue-grey back and black wing tips.

There are several trails across the Fleet Valley, some of which cross the National Nature Reserve. The most accessible is the In-bye trail, which begins from the Dromore Visitor Centre, and includes information boards covering local flora and fauna, as well as the Reserve’s history and geology.

Other longer trails lead up to the escarpment and the Clints of Dromore, where the ground can be rough and these should only be attempted by experienced, well equipped walkers.

Further details about other trails and walking routes around the Fleet Valley are detailed in a set of five leaflets available from both the Reserve’s visitor centre and the Mill on the Fleet.

Five sculptures by artist Matt Baker are also dotted across the Reserve. Based around five words – Erratic, Hush, Heart, Ocean and Scene Shifter – each is accompanied by a poem written by Mary Smith. At the viaduct you can sit on Ali Jeffries’ beautiful “cloud seat”. All these artistic works reflect the many elements of the landscape’s rich history.

What to look out for

Both red and black grouse breed on the moorland, while the area is patrolled by a host of raptors, including the diminutive merlin, the hen harrier and the peregrine falcon. The imperious golden eagle is also an occasional visitor.

Both red and black grouse breed on the moorland, while the area is patrolled by a host of raptors, including the diminutive merlin, the hen harrier and the peregrine falcon. The imperious golden eagle is also an occasional visitor.

Wheatears arrive in the spring, which is also a good time to spot skylarks, singing for all they’re worth, as they soar higher and higher into the sky. Listen out too for the laconic cry of the curlew.

Windy summit heath dominates the higher reaches of the Reserve, while lower down heather moorland takes over. Heather is a crucial plant on Cairnsmore, as it provides wildlife with food, shelter and a place to nest.

Heather stems always have buds in reserve too, ready to sprout new shoots as older ones die or are grazed. A healthy plant can also produce more than 150,000 seeds a year.

The acid soil at Cairnsmore means much of the Reserve is covered in blanket bog, in places up to 10m deep and over 7,000 years old. This internationally important habitat is topped off by a multi-coloured patchwork of the tiny red, yellow and green leaves of sphagnum moss. Just below this living blanket lies layer upon layer of dead moss, which is slowly turning into peat at the rate of about 1mm a year

It’s here too that carnivorous plants such as common butterwort, with its yellow green leaves, and sundew, with its spoon shaped leaves covered in red hairs, thrive. The plants use the hairs to catch insects which they then digest to help supplement the nutrient poor soil.

Among the mammals at Cairnsmore are brown hares, often seen on the lower grounds, and mountain hares, which have been seen at higher altitudes. A herd of wild goats also roams freely, as do red deer, with the stags mounting their
spectacular rut every autumn. Roe deer live on the more heavily forested fringes of the Reserve.

The golden-ringed dragonfly can be seen hunting over ponds and ditches, and the nationally rare blue hawker has been recorded at some of the remoter acidic bog pools.

The visitor centre is open all year round, and has public toilets and disabled access. The Mill on the Fleet is an old cotton mill in the centre of Gatehouse of Fleet. It stages regular exhibitions about the area and also has a café and tourist information centre. It opens daily from April until the end of October.
Tel: 01557 814099. www.millonthefleet.co.uk 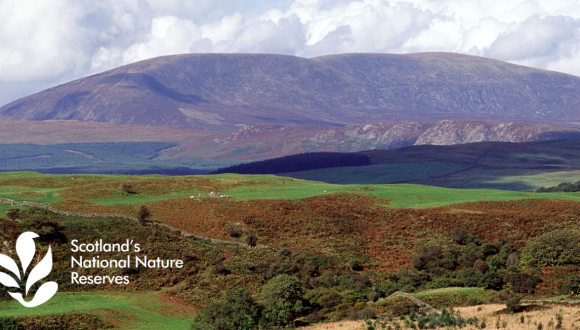