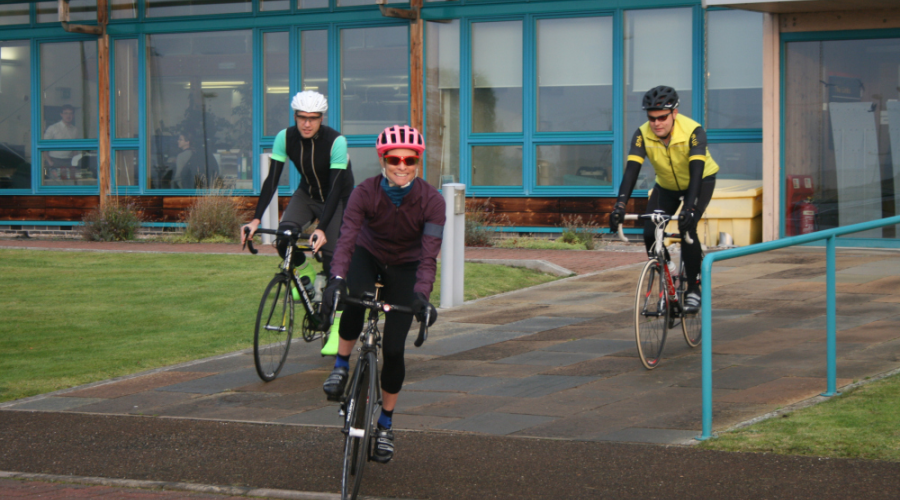 Well, She did it! More than 1300 miles cycled, 39 offices visited and more than £1100 raised for the Scottish Association for Mental Health. We last heard from Francesca in Orkney. In her final blog post of the challenge we hear about the last three days of #CycleForNature.

Day three of this final leg of #CycleForNature dawned bright and blowy in Scrabster. Our route to Golspie took us past the amazing Forsinard Flows. Despite the at times fierce headwind, operations officers Debbie Skinner, Karen Reid and I made good time which allowed us to have a great visit to the RSPB field study centre, visitor centre and eye-catching watch tower. Here we learned about the impressive Flows to the Future project which aims to restore blanket blog across the Flow Country. We also discussed the ambitions for the Flow Country to become a UNESCO World Heritage Site. An involved, but potentially highly rewarding, process.

It was then time to hit the road again, but not before a trial of an e-bike. The popularity of e-bikes is growing and having given it a go, I can see why! They don’t do all the work for you, but can give you a boost when you need it: ideal for those who want to cycle but feel that they don’t quite have the fitness. Anything which gets people out of cars and helps with active travel is a winner with me. Tempted? See the Scottish Government interest-free loan scheme for e-bikes.

The wind dropped which made for a fast run in to Golspie, now accompanied by Sally Ward. After a tour of the building (NatureScot is handily co-located with the Scottish Government, the Forestry Commission and Highland and Islands Enterprise), I had a good staff discussion with the Golspie team about NatureScot’S fantastic work in the area, and how we deal with controversial cases.

The penultimate day! Ian Sargent, Graham Neville and I set off to the Dingwall office in slightly gloomy conditions but somehow with a tailwind. We had a quick break looking over the Loch Fleet NNR estuary. The reserve is notable for its three distinct habitats which the common seals were clearly enjoying.  The reserve is also home to a range of bird life including waders and osprey.

I was met at the Dingwall office by colleague Iain Sime and Simon and Lynn McKelvey of the Cromarty Firth Fishery Trust. We visited the nearby Dunglass Island to see the vital work that the Trust has done to restore the river channel to improve biodiversity. The Trust is an important delivery partner in the Scottish Invasive Species Initiative and along the way they have trained and supported an army of volunteers, as well as working with numerous local schools. Brilliant to hear.

Then back to the Dingwall office for a chat with all the team there. As in all the office discussions, the passion, expertise and commitment of all staff was clear to see.

My weather luck didn’t quite last to the final day but five days with rain out of 32 isn’t bad! For the final stint to NatureScot’s HQ in Inverness I was joined by a number of colleagues from NatureScot and partners, as well as bike packer enthusiast Markus Stitz as we battled the impact of Storm Callum to make the final 17 mile journey. It was great to be welcomed at Great Glen House, including by Obama the pony from Pony Axe S (there’s an idea for next year…). It’s been an amazing journey. It’s not been about the bike, but about all the colleagues that I’ve met along the way who make NatureScot the great organisation that it is. Thanks to everyone that has made it happen.

After a staff vote, #CycleForNature has been raising money for the Scottish Association for Mental Health. We’ve raised more than £1,000 for this brilliant charity and I hope raised awareness of mental health issues throughout the journey.

I was touched at many of the comments on the JustGiving page and some of the personal stories that people have shared. It’s clearly an issue that means a lot to people and a sincere thank you to everyone for their generous donations.