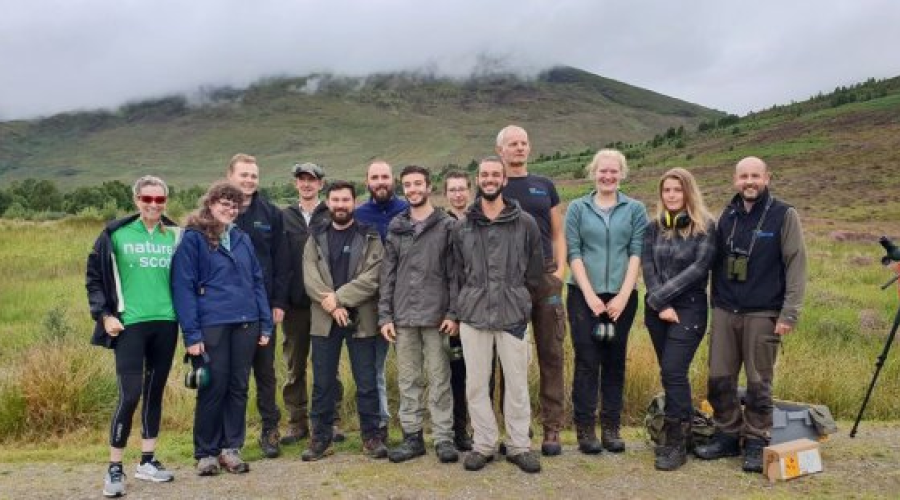 Leg six of #CycleForNature started at the beautiful Creag Meagaidh National Nature Reserve, as Francesca began another busy week on the bike.

Leg six of #CycleForNature started at the beautiful Creag Meagaidh National Nature Reserve, where the dramatic scenery includes Munro summits, an exposed whaleback ridge and ice-carved gullies. It's been another packed schedule for Francesca, as she describes below.

I spent the morning exploring the NNR with reserve manager, Rory Richardson, reserve officer, Ross Lavin and operations manager, Chris Donald, learning about all the work that takes place there. One of the interesting features of Creag Meagaidh NNR is that many of the trees planted  in recognition of long service at NatureScot are planted here. Rory was able to show me who’s tree was who's, as well as suggest where my own tree might be!

Because of its location, deer management to support native woodland regeneration is a key element of reserve work and Ross talked me through all the aspects of good practice in deer control. In addition, the reserve also acts as a training centre for NatureScot and Forestry Commission staff, as well as welcoming student placements and volunteers to develop their rural skills. I met a group of volunteers, including from Malta and France, who were incredibly enthusiastic about how they were developing their skills on the ground at Creag Meagaidh.

It was then time to get on my bike and head for Fort William. It is always nice to have a route that is mostly down hill! I stopped briefly to admire the Laggan Dam, part of an impressive hydro scheme operating in the area. I also travelled through the Lochaber SSSI, famous for the parallel roads geological feature.

On Tuesday it was a short hop from Fort William town centre up to the NatureScot office which we share with Forestry Commission Scotland. We had a good discussion about all the cross working that goes on between the two organisations. From there, operations officers Corrina Mertens, Lorraine Servant and I headed to the CFG Liberty Aluminium Smelter. This is a major employer for the area and was under threat when Rio Tinto decided to stop its activities in 2016. GFG bought the whole operation comprising smelter, power generation (including the hydro scheme connected to the Laggan dam mentioned above) and estates. NatureScot’s interests run through all elements of the business and we had a presentation about future plans, as well as a tour of the plant.

Now joined by operations officer, Andrew McMaster, we dodged the rain to take the Camusnagaul ferry so we could travel away from the busy A82 down to Corran (via ferry number two of the week). The sun came out and the views along Loch Linnhe were stunning.

Wednesday was Cycle to Work day which seemed appropriate. I was joined by Christina Wood from our Oban office, who took time out of her maternity leave to support #CycleForNature. We made good time on the journey from Corran to Oban, with a couple of stops. The first to meet David Colthart, local farmer and Chair of the Argyll Sea Eagle Stakeholder Group, near Shuna Island. I received an excellent overview of some of the challenges that sea eagles pose to farmers in the area, whilst recognising the need to support this iconic species.

Accompanied by operations officers Ross Lilley and Sally Weaser, we were now back on the National Walking and Cycling Route for the journey down to Oban. We stopped at Loch Creran to discuss marine issues with operations manager, Andrew Campbell. Loch Creran is home to the world’s largest serpulid reef, an extremely rare habitat which supports a fantastically diverse range of other species. The reasons why the reef has formed and thrived here are not fully known and it was fascinating to learn about this world renowned site.

From Loch Creran it was a relatively short cycle to the Oban office, which we share with Scottish Government colleagues from the Agriculture and Rural Economy Directorate. Over some welcome soup, I heard about the benefits of this colocation, particularly when dealing with agri-environment applications.  The final part of the day’s journey was ferry number three of the week, from Oban to Port Askaig, Islay. A beautiful journey into the setting sun.